British architect Adam Knibb has added this cross-laminated timber extension to a house in the English county of Hampshire, and connected it to the former barn building by a frameless glass box.

The grade II-listed Hurdle House was constructed in 1835 to store the wooden hurdles used to form pens during the town of Alresford's regular sheep fairs. It was used until 1864, when the laying of a railway through the fair's field necessitated the construction of a new building at a different location.

The owners wanted a modern extension that respected the original structure and turned to Adam Knibb Architects, which is based in nearby Winchester.

It runs north to south along one side of a site containing a gravelled drive and a large garden to the north. The new addition is positioned perpendicular to the northern end of the former barn to ensure it makes the most of the garden views.

"[We] approached the scheme with the aim to set the works into the surrounding nature, provide natural light, harness the fantastic views and provide a social heart to the house and for the family," said Knibb.

The exterior of the extension is clad entirely in vertical timber boards that lend it a clean, modern aesthetic. The only interruptions are the windows, which feature minimal black frames.

"Vertical timber cladding has been used to mimic the surrounding trees and provide a contemporary contrast to the existing building, which clearly shows that this work is architecture of this time," said the architects.

The whole structure was prefabricated offsite to reduce time and disruption on site – and was erected and ready for fitting out in just five days.

It is made from cross-laminated timber (CLT) – a type of engineered wood made by layering three, five or seven timber sections of wood at right angles – and produced in Austria to specifications by UK firm KLH, and flat-packed for delivery to Hampshire.

CLT is considerably stronger and more stable than regular wood, and increasingly being introduced as a substitute for steel and concrete.

The extension accommodates an open-plan kitchen with an island unit and a dining table close to the glazed link. A partition separates this space from a study, with a bathroom and utility area at the far end.

The elevation facing the garden incorporates large sliding doors providing uninterrupted views and a direct connection with the outdoors.

A new main entrance and large picture window inserted into the facade fronting the courtyard look straight through the building towards the garden on the opposite side.

A bay window in the existing building was removed following a consultation with the local planning department, creating space for an entirely glazed connection between it and the extension.

This frameless glass link minimises any visual interruption to the barn's facade and maintains a view through from the courtyard to the greenery beyond the building.

Adam Knibb Architects has previously completed a matching pair of wooden gabled homes and an elevated timber extension to a converted school. 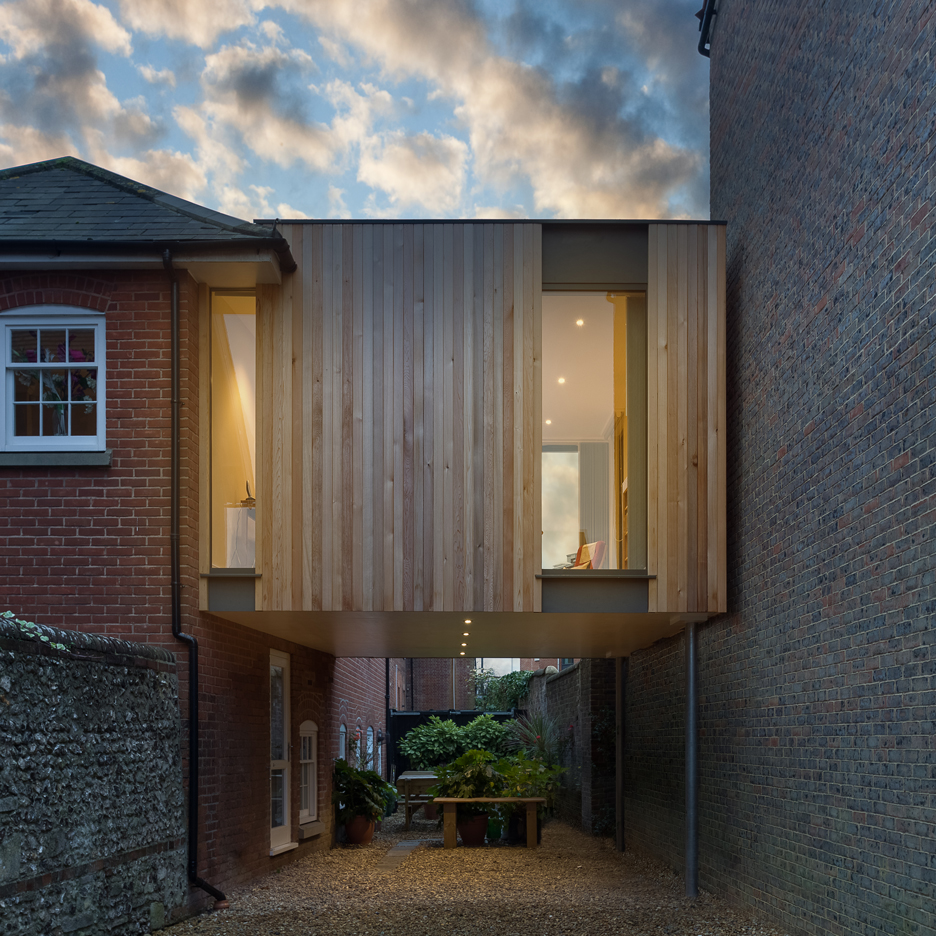 Photography is by James Morris.