A light and spacious kitchen, dining and lounge opens onto a latticed balcony in this Tel Aviv apartment, which has been completely overhauled by Dori interior design studio.

The Israeli interior designers reconfigured the Weisel apartment, which is located in a block of flats built in 1957.

They removed walls that formed a narrow diagonal corridor and a series closed-off spaces to create one open-plan room.

This space is now occupied by the kitchen, living and dining room, and a home-office sectioned off by a glass partition. A set of curtains can be drawn across the glazed screen, which is surrounded by a thin wooden frame, to offer further separation between home and work.

"Originally, the apartment was full of small niches, and a long, dark, narrow diagonal corridor," said the studio. "The kitchen was tiny, closed, rear and away from the living room."

"The public area includes the living room, the big terrace, kitchen and dinning area is one big open space that is a very functional, open, inviting and bright area, and combines various seating and hosting options," they continued.

Dori also removed shutters on the street-facing side and replaced them with large expanses of glazing. One of these panes slides open to prove access to a new terrace, which overlooks the busy avenue below.

The outdoor patio is encased by Mashrabiya latticework – a decorative perforated screen commonly found on buildings in the area – that creates a pattern of light and shadow across the concrete floor.

A wooden step connects the two levels of the terrace, which also features a concrete bench.

"The Mashrabiyya is an architectural element typical of Islamic architecture, which evolved to create a difference between inside and outside, in order to allow the entry of air and light, but simultaneously allow privacy," explained the designers. 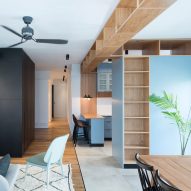 "Originally the Mashrabiyya was hidden by old shutters, some of the apartments in the building even blocked it by interior walls," they added. "It is an important and beautiful element to be emphasised."

Inside, white-painted walls are complement by light wooden accents. The back wall of the kitchen is covered in patterned tiles and features a window that frames views to planting outside.

A white counter with a wooden trim lines this wall, while a dining table with concrete pendant lights above separates the kitchen from the living room.

Between these there is a television attached to a metal pole that can rotate towards the different areas.

There is also a set of shelves that are suspended from the ceiling, creating a separation from the entrance hall.

Wooden cabinets with a black line drawn across their fronts line the wall leading to the master bedroom. Here, the en-suite bathroom is encased in a glass box set beneath exposed concrete beams.

Weisel apartment is the latest in a wave of Tel Aviv apartments to be transformed with contemporary interiors.

Others include Ranaan Stern's sprawling, four-bedroom apartment, which is arranged around a long corridor, and Maayan Zusman's petite home, which is filled with custom storage.

Photography is by Adi Cohen Zedek.