A+Awards: a dramatically thin roof soars over the glass front of the Apple Store at Stanford Shopping Center, Palo Alto – another of this year's winners at the Architizer A+Awards.

The store in the heart of Silicon Valley was designed by Apple favourites Bohlin Cywinski Jackson, a US firm that has created multiple retail spaces for the tech giant.

Completed in 2013, the design built on the company's previous shops like the iconic glass cube on Manhattan's Fifth Avenue.

"It is a fresh and evolutionary direction for the Apple retail programme with a design that is a re-interpretation of the favourite architectural themes developed over the past 13 years, while retaining many of the familiar elements associated with Apple Stores," said the firm.

The glass facades are designed to make the store feel like part of the plaza in front.

On top sits a very thin roof, which overhangs the glazing and is supported by glass fins around the perimeter. 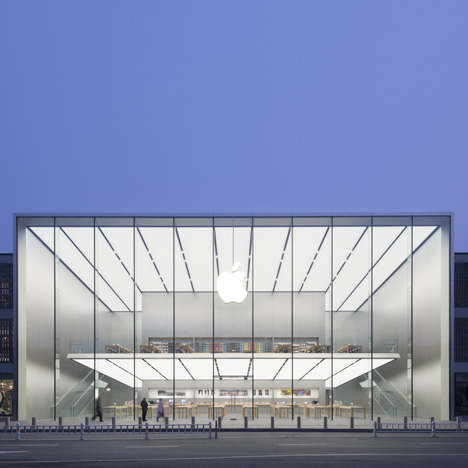 This leaves the room column-free, allowing for products to be displayed on long wooden tables from end to end.

In contrast, the space behind – for services, training and shopping for accessories – is more enclosed.

Here, stainless steel beams support an arcing glass roof that lets natural light in from above rather than at the sides.

"A feeling of privacy and uniqueness supports the ambition for a place of gathering and learning, creating a special community room," said the studio.

Bohlin Cywinski Jackson's most recently completed Apple Stores include outposts in the Santiago Calatrava-designed Oculus at New York's World Trade Center and in the trendy Brooklyn neighbourhood of Williamsburg.

The Stanford branch was a jury winner in the Retail category of the 2016 A+Awards.

Entries are now being accepted for the next A+Awards. This week is the last chance to enter with a discounted rate, which expires 4 November 2016.

Photography is by Peter Aaron.