A latticed wooden canopy shades this swimming pool and terrace, designed by Michael Goorevich for a Malibu house on a slope overlooking the Pacific Ocean.

Nashville-based architect Goorevich wanted to make the most out of views from the Malibu Hillside house in Los Angeles, which is located on a steep site facing the sea.

The architect referenced the horizontal planes of Californian modernism for the L-shaped pool and deck area.

"Invoking the midcentury spirit of Craig Ellwood and the unabashed bravado of John Lautner, the new project hovers above its hillside site as an assertive object and a quite frame," said Goorevich.

"In this way we learned how to build next to the sea."

The terrace cantilevers from the hill out towards the ocean, while the infinity pool runs off the edge, creating a line where the blues of the two waters meet.

"The project brings together light, shade, water and sky in an effort to blur the distinctions between wet and dry, here and there, inside and outside, above and below," said Goorevich.

The gridded wooden trellis provides shade from the sun but stops halfway along the terrace, leaving the end exposed to the sun and views.

So as not to block views, the patio is wrapped by a glass banister. Sun loungers, and a long wooden bench and matching table furnish the outdoor space.

The terrace, which is supported by a series of black columns that stagger down the hill, also forms a covered patio below.

A woven cocoon-like seat that hangs down from its exposed timber roof for relaxing and enjoying the view, while a trellis on one side provides a frame for planting to grow up. 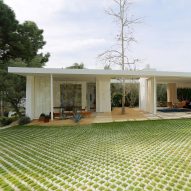 Malibu Hillside is one of a number of recent projects that references this history, along with a Hollywood home with indoor spaces that extend to the exterior and a vegan cafe owned by musician Moby.

Photography and video are by Eric Staudenmaier.