The front facade of this family home in Tennessee by Hastings Architectural Associates comprises a monolithic concrete wall and weathering steel panels.

The house is dubbed Mask House for its imposing northern facade, which is designed to protect the client's privacy.

"The clients requested an exterior that would veil the true nature of the home beyond," said the firm based in Nashville, the state's capital.

The project was built in Woodmont Estates — a neighbourhood planned by landscape architects the Olmsted Brothers in 1937 in the same city.

Visitors approach the single-storey property from the north, and are faced with the concrete wall, which measures 160 feet (48 metres) long and 16 feet (five metres) high.

Windows in this wall are protected by Corten steel panels, hung on the facade to ensure privacy while still admitting light within.

"A row of weathering-steel panels plays with the perception of solid and void, lightness and solidity, and function as a screen to obscure visual connection between interior and exterior," said Hastings Architectural Associates.

Entrance to the 6,500-square-foot (605-square-metre) home is through an opening in the centre of the northern facade that leads to a small foyer. The living room lies beyond this space, and is open to the south side of the house.

"In contrast to the concrete mask wall to the north, the southern wall is fully glazed and opens onto a covered outdoor living area before spilling out into a lush central courtyard," the architects said.

Two wings complete up the U-shaped plan. To the west, a series of rooms are reserved for the owners. These include a master bedroom, walk-in closet, and private office.

On the opposite side of the living room, the architects located two secondary bedrooms, an office and an exercise room.

Because the two wings of the house wrap around the back yard, most rooms have direct access to it. "From the sheltered vantage of the courtyard, the openness and transparency of the interior facing elevations stands in contrast to the outward facing elevations," said the studio.

Interior finishes contrast the roughness of the home's front facade. For example, the floor and ceiling of the main living space were finished in ipe wood, a tropical hardwood known for its strength and dark colour.

Other projects that use weathering steel in the United States include a Colorado mountain retreat that delineates interior spaces with the thick panels and a property in Utah that uses Corten steel shingles as a cladding material.

Photography is by Albert Vecerka, Esto. 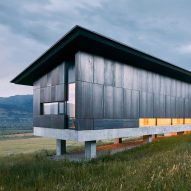