Plans are underway to demolish and replace Tadao Ando's concrete pavilion at Piccadilly Gardens in Manchester, the Japanese architect's only building in the UK.

Manchester City Council outlined its ambitions to "refresh" Piccadilly Gardens, a green space in the city centre, in a report that will go before an executive committee later this week.

Tadao Ando's 130-metre-long curved concrete wall currently stretches across the area, shielding the green space from a transport interchange. On one side a cover shelters a coffee shop.

The structure was completed in 2002 as part of the regeneration of the city following an IRA bomb in 1996, but has since declined in condition.

The aim of its redevelopment is to improve the quality and safety of the space, which has seen an increase in anti-social activities and crime.

"The City Council and Greater Manchester Police have, over the past few years, been working together to tackle concerns regarding Piccadilly Gardens, particularly relating to anti-social behaviour, crime and the maintenance and care of the public realm," said the report.

"In recent years, a number of residents, visitors and stakeholders have also raised concerns about the look and condition of Piccadilly Gardens, in relation to the pavilion building (including the current wall sculpture), and the landscaped areas," said the report.

The regeneration plans have emerged following a series of public campaigns against Ando's design, including a petition signed by over 20,000 residents of the city that demanded "either demolishing or transforming its unloved concrete wall, once and for all".

"For years Mancunians have despaired of the petty crime, bleak concrete and patchy grass that dominate Manchester's main public square," said the petition.

In 2013, another high-profile petition sought to cover over the concrete with greenery – an idea that the architect responded to and welcomed.

"I would support either way because everybody has different perspectives and vision towards anything that exists," Ando told Manchester Evening News at the time. "They can have very strong opinions or might be affected by trends or people around. I respect them all."

Manchester City Council council estimates that 16 million people pass through the gardens each year, making the overhaul more important for the city. Property owners Legal and General will fund the £10 million overhaul, which will see Ando's structure replaced with restaurants and a coffee shop designed by Urban Edge Architecture.

Tadao Ando is famous for his concrete and glass architecture, and was awarded the Pritzker Prize in 1995. Among his best known projects are the Church of the Light in Osaka and the Naoshima Contemporary Art Museum. 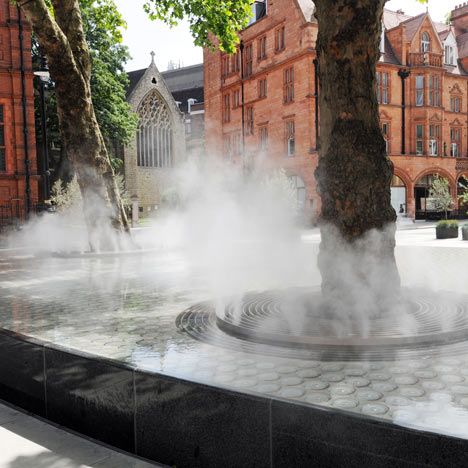 His only other design in the UK is a water feature he created with Blair Associates in London's Mayfair.

Other recent projects by Ando include a seaside house and art centre in Mexico and a seven-storey luxury apartment tower now under construction in Manhattan.