ArchiBlox has given this prefabricated beachfront house near Sydney a verdant plant-covered roof to help it blend into its clifftop setting.

Avalon House is situated on one of the sandstone cliffs that overlook Avalon Beach, around 35 kilometres north of central Sydney.

The property was designed by ArchiBlox, a Melbourne architecture studio specialising in modular buildings and that previously developed a carbon-positive house.

In the case of the Avalon House, the prefabricated construction method enables the house to sit lightly on its plot and facilitated a rapid build time of just six weeks.

"We are still combating a shortage in the Australian market for architect-designed sustainable dwellings that are affordable," said architect Bill McCorkell. "That market is definitely here to stay and will only grow in the coming years."

The house was designed to make the most of its rare north-facing site, so large windows are positioned along the elevation to benefit from beach views and the northern sun.

Dark steel cladding applied across the majority of the facades was chosen for its robust properties, which are essential in a seaside location prone to salt spray and strong winds.

Timber surfaces used elsewhere introduce a softer natural element. The wood is particularly evident on the elevation facing the street and wraps around a corner where it lines a wall leading to a rear terrace.

The house has a compact floor area of just 106 square metres but comfortably accommodates two bedrooms, a bathroom and an open-plan kitchen, dining and living area, as well as a storage space for equipment including surf boards.

A garden covering the building's roof enhances the building's connection to its context and features plants chosen for their similarity to those found on the surrounding cliffs.

The building is raised above the earth on structural posts to reduce the impact of foundations on water flow across the site, which could have contributed to dangerous levels of erosion.

The planted roof also minimises rainwater runoff and adds thermal mass that helps to insulate the interior. Rain falling on the roof is directed into a 7,500-litre above-ground storage tank so it can be used for irrigation.

The building's eastwest orientation promotes cross ventilation from northwesterly breezes that are encouraged to enter through optimally positioned operable windows that only need to be opened a small amount to air out the house.

The interior features a palette of deep blue and bright orange, which was influenced by the hues of the sea and sand.

A Japanese-inspired bathroom requested by the owners to offer a memory of time spent living in the country features a traditional tub and shower area lined with wood-effect porcelain tiles. 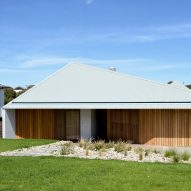 Photography is by Tom Ross, unless stated otherwise.