A shot of a brick reservoir in London's Finsbury Park has been selected as the best architecture photograph of the year at the Arcaid Images Architectural Photography Awards 2016.

The image, taken by British photographer Matt Emmett, captures the brick arches of the covered reservoir, which was designed by the East London Waterworks Company in 1868.

Emmett's speciality is capturing scenes of ruined or derelict architecture, and he runs the website Forgotten Heritage.

This is the the first time in the award's four-year running that a photograph of a historic location has been given the prize.

The Arcaid Images Architectural Photography Awards aims to highlight the expertise of specialist architectural photographers, and this year accepted entries under four categories: Exteriors, Interiors, Sense of Place and Buildings in Use. 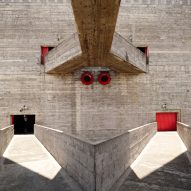 Emmett's photograph was exhibited alongside 19 other images shortlisted for the award at this year's World Architecture Festival, which took place between 16 and 18 November in Berlin. The winning entry was announced during the event's gala dinner.

The image was selected by jury members including Emily Booth of The Architectural Review; Amy Croft, curator of Sto Werkstatt; Katy Harris, who is head of communications at Foster + Partners; architect Kai-Uwe Bergmann of BIG; and photographers Fernando Guerra and Ulrich Müller.

Emmett saw off competition from a group of acclaimed architecture photographers who framed shots of buildings by architects including Peter Zumthor, Herzog & de Meuron and Linda Bo Bardi to win the award worth $3,000.