Allen Jack + Cottier's proposal for a new fish market in Sydney, recently named Future Project of the Year, aimed to "regenerate a whole section of the city", according to architect Michael Heenan.

Australian firm Allen Jack + Cottier designed Sydney Fish Markets as a public square on the harbourside, with a marketplace at its centre. Intended to replace the existing market, it features a reflective, 300-metre-long canopy.

The project won the Future Project of the Year 2017 award at the World Architecture Festival in Berlin last month.

In this movie filmed by Dezeen, studio principal Michael Heenan says the aim was to transform an "overcrowded, dangerous, odorous and dilapidated" area into a destination known for high-quality food production.

"The new Sydney Fishmarkets is a filigree, floating canopy that's about 300 metres long and 150 metres wide, floating over a new important public space, and a marketplace sits within it," he says.

"It's a critical building to regenerate a whole section of the city, to bring us on to the map as a young fresh food city and to see us as a place where we can produce the cleanest, freshest food in the world."

Allen Jack + Cottier envisioned the canopy being built as a monocoque carbon-fibre structure, with a reflective underside.

"That canopy comes from boat-building technology," he explains. "The structure is in the fabric itself. Its the lightest and strongest material you can imagine".

"I've also introduced this simple thing of making it reflective from below," he continues. "A fish market is about chaos, activity, noise, steam, ice and fish everywhere. You get that reflected in the roof and so the spirit of the place is coming back at you all the time."

"It reflects the garden and the fishing boats outside. It's designed to know where the altitude of the sun is to let the sparkling light in," he adds.

Although the project triumphed at the World Architecture Festival, Allen Jack + Cottier did not win the bid for the regeneration – so the project won't become a reality. Instead, a scheme by 3XN will be built.

Dezeen was media partner for the World Architecture Festival, which takes place annually in conjunction with the Inside festival of interior design.

Last year's winner of the Future Project of the Year title was a design for "vertical school" and community centre for Melbourne, which features a staircase that doubles as a gathering space for the building users. 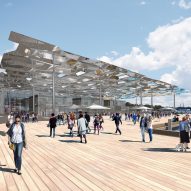