The Vessel by Heatherwick Studio and Safdie Architects' Jewel Changi Airport are among the buildings in the running to be named World Building of the Year at the World Architecture Festival.

The World Building of the Year, as well as the Future Project of the Year, will be announced at the twelfth edition of the annual World Architecture Festival (WAF), which takes place in Amsterdam later this year.

The 2019 shortlist for the WAF awards features 534 entries from across 70 countries and includes numerous projects by world-leading architecture studios, including Morpheus Hotel by Zaha Hadid Architects and ALA Architects' Helsinki Central Library Oodi.

Other studios competing for the title, including EFFEKT Architects that entered its Camp Adventure Tower, and Woods Baggot with St Andrews Beach House.

WAF programme director Paul Finch highlighted the number of projects on the WAF 2019 shortlist with sustainable considerations, including BIG's affordable modular housing in Copenhagen and the Macallan Distillery by Rogers Stirk Harbour + Partners, which is characterised by its roof made from sustainably-sourced timber.

"We have been inspired by the levels of innovation in this year's entries, that show the incredible range of ways in which architects are responding to the global climate and biodiversity emergencies we face," said Finch.

Other significant projects shortlisted for WAF awards include Kiruna City Hall by Henning Larsen, a chasm-like pavilion by Muir and Openwork at the National Gallery of Victoria and Heatherwick's Coal Drops Yard. 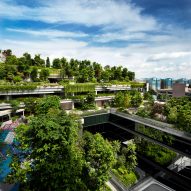 Winners will be selected from over 30 categories and announced during the festival, which takes place in Amsterdam between 28 and 30 November.

Completed buildings compete for the prestigious World Building of the Year title, while winning conceptual projects will battle for Future Project of the Year.

This year, presentations will be judged by a "super jury", including architects Anuradha Mathur and Maria Warner Wong, and Dezeen columnist Aaron Betsky.

In total there were more than 1,000 entries for the WAF awards. Chinese studios fielded the most entries demonstrating the country's continuing emergence as a design hotspot.

Australia entered the second most submissions, followed by the UK, USA and India.

Last year WOHA's green community for senior citizens in Singapore was crowned 2018 World Building of the Year, and the Medellin River Parks masterplan in Colombia was named Future Project of the Year.