A visit to the new IKEA museum reveals a tension at the heart of the company, between Swedish values of openness and tolerance, and a bid for global domination, argues Tom Cubbin in this Opinion column.

Most foreigners who have found their way to Älmhult – a town of roughly 10,000 inhabitants in the Småland region of southern Sweden – fall into one of two categories. They are either Germans who own holiday cottages vacated by an agricultural worker who emigrated to the USA before the war, or they work for IKEA, the world's largest furniture retailer, whose headquarters are located in this unassuming town.

The first purpose-built IKEA showroom opened in Älmhult in 1958. But in June 2016, the town unveiled a new attraction – a new IKEA museum, housed inside the old showroom.

Any visitor to such a corporate museum arrives willing to be seduced by a company to whom they have paid an entrance fee, in the hope that they can be included in the processes of corporate mythologising. IKEA is so important in many of our lives and we crave to be acquainted with a company whose products we know intimately. We sleep on them, cook with them and do other things in/with them. But to know the origins of IKEA's customs is to become a fully accepted family member.

IKEA is so important in many of our lives

For example, we are told how the ritual of transferring items from yellow to blue bags at the checkout emerged after customers in Hamburg began to take bags home with them, as they were so enamoured with the simple but tough design. Besides giving us our required dose of whimsy and nostalgia, this particular mythology emphasises what we are told elsewhere is a typically Swedish trait: "cunning".

In Älmhult, Sweden is a synonym for IKEA and its values (although not necessarily the other way around). Social democracy, appreciation of nature, a protestant work ethic and good taste are what Sweden has brought the world.

At the museum, this message is put forward through an audacious presentation of a combined Swedish social and design history. Covering the first floor of the exhibition, it opens with the caption: "At first poor and underdeveloped, then, starting in the 1930s a country determined to become a modern and egalitarian society. Two very different periods that, in their own ways, shaped the IKEA we know today."

The achievement of this exhibition is to locate IKEA's origins, not as a mail-order business determined to undercut its competitors, but as a company that emerged quite literally from the Swedish earth.

To do this, the curators have secured long-term loans on items from the Småland regional museum and placed them alongside objects produced by IKEA. A lump of local iron-ore is placed next to new stainless-steel milk whisks, while a rustic tableau of a poverty-stricken farmstead contains some wooden IKEA storage boxes inspired by the shabby-chic aesthetic. The captions are intentionally small: it doesn't matter what is "authentic" and what is fake – after all, IKEA is no stranger to intellectual property lawsuits.

Under low-level lighting that you might find in an exhibition of Viking coins, we see IKEA reproductions of Larsson porcelain, original Wilhelm Kåge "workers"' porcelain exhibited in the 1917 Home Exhibition, an original Gunnar Asplund chair, and a mix of original and reproduction furniture in the 18th-century Gustavian style (the apparent origin of Swedes' interminable desire for ever brighter homes).

Having located its roots in the idea of a white, protestant Swedishness, which combines austerity, good taste and a need to compensate for the lack of natural light, the exhibition turns to locate IKEA within the Swedish concept of social democracy. It is at this point that the racial overtones of the exhibition become apparent: the Nordic model is not presented as a result of social struggle and negotiation, but as a natural state for those of Swedish descent.

The happy housewife who once made rag-rugs later became manager of the efficient social-democratic and hygienic, modernist kitchen. She was the fortunate subject of history who gained all of these equalities without expending much more effort than tipping used packaging down a chrome rubbish chute. This is because she was Swedish, and Sweden is a social democracy. Such myths don't always go down so well in Sweden, but might appeal to those whose desire for Swedish design is related to clever national marketing of the Swedish model.

There is a brief mention of IKEA founder Ingvar Kamprad's well-known former friendship with fascist leader Per Engdahl, which is explained away in a one-line quote from Kamprad as "my life's greatest fiasco".

By the end of the first floor, the foreign visitor has no tools to discern the boundary of Sweden and IKEA. As I went to have lunch in the museum's internationally themed meatball restaurant (chicken and kimchee meatballs, anyone?) my head spun over my food: do we eat meatballs in IKEA because they are Swedish, or do Swedes eat meatballs because they sell them in IKEA?

Upstairs, the museum deals with the history of the company itself (including some stylish retro showroom displays) and we learn the real secret of the company's success: material innovation that makes goods cheaper to produce and transport. IKEA's role in popularising Polish pine, chipboard, and honeycomb wood structures has had an enormous impact on the design of homes globally. There is a small reference library of IKEA materials, as well as a video and catalogue library that charts the history of IKEAs presentation of itself: a resource that will be of great use to those interested in the late 20th-century domestic interior.

The museum quickly returns to the subjects prepared in the Swedish history exhibition, including a display on "democratic design", whose level of signification does not appear to spread much deeper than a pentagon with the words function, quality, form, sustainability and low price printed around its edges. The link between this collection of nouns and democracy is not really explored, perhaps deemed too obvious for explication. 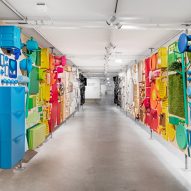 The subsequent section on sustainability is given very little space considering that a harmonious relationship with nature is an important cliché of Swedish design.

As a multinational company, IKEA must decide where to promote its Swedish values of openness and tolerance, and where to adjust to the demands of external markets. The retailer's move from Swedish discount store to global superpower is also underplayed in the exhibition, possibly as this highlights a tension at the heart of contemporary IKEA , which has the potential to bring back echoes of Kamprad's chequered past.

Will designs sold at IKEA embrace the diversity of modern Sweden and the world it inhabits?

The removal of women from images in a 2012 catalogue for the Saudi Arabian market was a scandal in Sweden because it represented a threat to the idea of Swedish gender equality, which right-wing Swedish Democrats say is the result of migration and Islamification.

It feels like the museum is tongue-tied on the consequences of IKEA's own global expansion because it has built its own mythology on a white vision of Swedishness. Enriched by the minerals in the fertile earth of Småland, IKEA has sought to democratise the tastes of an affluent bourgeoisie by bringing it to those of less fortunate classes or nationalities. With the exception of the American-invented Allen key, the exhibition grants no agency to the influence of foreign ideas and concepts, while simultaneously claiming to embody values of openness and tolerance.

I am keen to see how the museum's temporary exhibition space will narrate the future of this important company. Will designs sold at IKEA embrace the diversity of modern Sweden and the world it inhabits? Will a "Swedish" love of nature and wood be enough to transform IKEA into a sustainable multinational company? Caught between its own mythological Swedishness and the challenges of the modern world, the museum can perhaps teach us a valuable lesson: without deconstructing our own identities, we have little hope of solving the problems of the 21st century.

Tom Cubbin is a senior lecturer in Design Studies at HDK – Academy of Design and Crafts in Gothenburg, Sweden. He recently completed his PhD on Soviet Critical Design at the University of Sheffield. He holds an MA in History of Design from the Royal College of Art, where he has also taught in the School of Critical and Historical Studies. Tom has published work in the Journal of Design History, Home Cultures, Estonian Art and The Calvert Journal, and is currently working on a monograph about Soviet design.
Read more: