White boxes contain different spaces for socialising and working inside this multifunctional building in China, which was recently fitted out by Lukstudio.

Atelier Peter Fong, located in the Tianhe District of Guangzhou, is home to both a coffee shop and a co-working space.

When organising the space, Lukstudio developed a concept that involved containing different areas within a series of voids.

The voids, which appear as white boxes on the building's facade, encompass a cafe, brainstorming area, meeting room and a breakout lounge.

In contrast to the stark white exterior, the inside of each box is painted grey, with the original structural ceiling left intact.

Elsewhere in the building, materials are used to define the different zones. Smooth surfaces such as white walls and terrazzo flooring dominate the main space, the brainstorming box is lined with polycarbonate panels, and intimate areas are defined by timber panels and brick walls.

By the entrance to the office is a zen garden where workers can go and relax.

"The complete transformation of a forgotten site into a destination demonstrates how architectural interventions can activate the streetscape and enhance nearby communities."

Furniture used throughout the entire space is by brands including Emeco, Hay and Muuto, and is generally soft in colour. Chairs are made from pastel-toned and natural woods, while tables are constructed from lacqured white wood.

Lukstudio was founded in 2011 by Christina Luk. The Shanghai-based studio previously suspended metal wires to look like drying noodles at a Chinese restaurant, and repeated a gift-box motif throughout a Shanghai macaron shop. 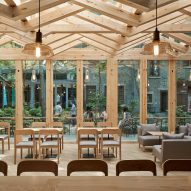