New York firm CAZA has unveiled design for a hospital and trauma centre in a popular beach town in the Philippines, which will feature stone cladding, verdant courtyards and light-filled interior spaces.

The healthcare facility will be constructed in Baler, a coastal community with approximately 39,500 residents, which is also where 1979 movie Apocalypse Now was filmed.

Surrounded by mountains and tropical flora, the medical centre will serve the area's growing population and the numerous tourists who visit the region, including surfers drawn to Baler Bay's massive waves.

Called Ospital Pacifica de Juan and Juana Angara, the building is named after a senator who is helping fund the project.

"This will be the first combined general hospital and trauma care centre in the country, and will drastically improve the medical support to this remote area of the Philippines," said CAZA, or Carlos Arnaiz Architects, a Brooklyn-based firm with offices in Bogotá, Colombia; Lima, Peru; and Manila, Philippines.

"The design imagines both a pragmatic and a futuristic solution to the challenge of such a specialised and exacting program."

The building, which will be constructed using prefabricated components, is meant to serve as a model for medical facilities in rural environments.

"Its contextual design can be adapted to other environments through a customised external presence and public spaces that respond to specific local conditions," the architects said. 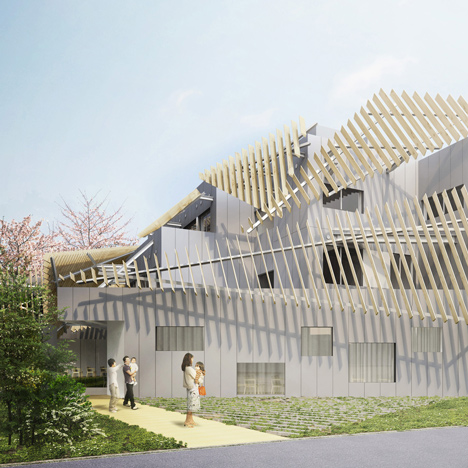 Encompassing 6,120 square metres, the centre will contain operating rooms, maternity wards, an imaging area, a chapel and a cafe. The exterior will be clad in grey stone and a perforated white material.

L-shaped in plan, the facility will consist of a long bar connected by a covered walkway to a sculptural volume housing the chapel. Walls sheathed in stone will hold up portions of the roof.

Ample glazing will usher in natural light, while deep overhangs will mitigate solar gain and shade a portico that wraps the perimeter of the building.

A series of garden courtyards will offer patients the "therapeutic presence of nature".

Designed to accommodate 75 patients on a daily basis, the facility will contain interior spaces that can be reconfigured.

"The architecture, space and program are planned around a nine-by-nine-metre grid that accommodates a three-by-three-metre room module, providing the flexibility to form a variety of different arrangements for patient and examination rooms," the firm explained.

A central spine will efficiently circulate staff and medical supplies from the trauma centre to the general hospital.

Construction begins in December, with an anticipated completion date of March 2018.

The $8 million project (£6.4 million) marks the first healthcare commission for CAZA. It aligns with the firm's goal "to provide rural regions worldwide with revolutionarily convenient access to critical healthcare".

The firm's completed projects include a church framed by walls that create a maze-like sequence of passages and entrances, also in the Philippines.