MVSA Architects were inspired by superyachts when creating the European headquarters for fashion brands Calvin Klein and Tommy Hilfiger on the banks of Amsterdam's IJ river.

The new European headquarters for PVH Europe, which owns Calvin Klein and Tommy Hilfiger, features 12 storeys of offices and showrooms for its various American brands.

Wanting the building to have a commanding presence, local firm MVSA Architects obtained permission to build at nearly double the permitted 21.5-metre height restriction in the area.

At 50 metres high, the headquarters towers above its neighbours.

The building is perched at the tip of the Danzigerkade in Amsterdam's Houthavens district – a port along the IJ river that hosts a parade of superyachts every five years.

To mimic the shape and style of the streamlined boats that sail past, the architects set the upper 10 floors at a slight cantilever so that the building leans towards the water's edge.

"It is cantilevered to give it a dynamic look," project architect Wouter Thijssen told Dezeen. "Like a superyacht, ready for departure."

Faceted white aluminium walls clad the lower two levels to create a shape that resembles the underside of a boat, while the roof projects towards the water like the bow.

"Its oblique lines create dynamism, while gracefully suggesting the form of a ship," said MVSA Architects. "Gleaming white aluminium and steel add to the maritime effect."

Ribbons of windows make up the main body, offering office workers views of the surrounding water, while white ribs with steel edges provide shading. On the western side of the building, canopies in the same white aluminium as the walls cover the lounge decks.

Inside, the offices are arranged in an open-plan layout, with different areas separated by glass walls. Thin wooden panels cover the ceiling and walls, while white-washed wooden boards provide flooring.

These wooden finishes also feature in the cafe on the ground floor, which has a large window facing the waterfront as well as the lobby.

The headquarters completes a trio of contemporary landmark buildings in the Houthavens district, including the Eye Film Institute and the Muziekgebouw aan 't IJ music hall.

Marc Koehler Architects recently completed a wooden, prefabricated house in the area, while further along the IJ, Bjarke Ingels Group and Barcode Architects have revealed their competition-winning design for a tower.

The mixed-use building will act as a gateway to Amsterdam's IJburg, a neighbourhood set on artificial islands that float on IJ. 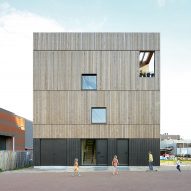