MAD has completed the first phase of its Fake Hills development – an apartment complex in Beihai, China, with an undulating roofline that accommodates tennis courts and swimming pools.

The topography-inspired housing block runs along the back of the 800-metre-long ocean-side plot, and will later be joined by a cluster of smaller blocks and a tower with wavy edges.

Beijing-based MAD wanted to combine high-rise and "groundscraper" blocks within the 492,000-square-metre complex, in a bid to counter the the site's otherwise flat topography.

These images by photographer Xia Zhi – which are revealed in the practice's recently released monograph MAD Works – show the results so far.

"Born from the desire to capture the region's distinctive scenic character, the design places an iconic mountainous profile along the ocean-front," said the firm, which is led by Ma Yansong.

"This response passed over the typical, mundane, urban tower complexes of recent developments in China for a visionary solution: a sinuous landscape comprised of roof terraces and balconies imbued with nature, light and air that immerses residents within the environment."

The firm sees the scheme as a model alternative to the standardised and cheap housing blocks that populate new cities across China.

The flatter parts of the hilly roof topping the completed block include spaces for badminton and tennis courts, as well as a garden and swimming pools, while the steepest parts are covered in terraced balconies that offer sea views.

Huge hollows in the facade not only ensure existing blocks to the rear are not cut off from sea views and breezes, but also provide rock-climbing facilities.

"The result is an undulating, hill-like form comprised of a single linear mass."

"The egalitarian principle of providing natural light, fresh air and ocean views underpins the building and together they create a new building typology and an environment that encourages a healthy lifestyle," they added.

The gridded facades of the slender block are covered by individual sections of glazing and cantilevering balconies that make the most of ocean views, as well as down to the gardens being developed around its base.

MAD recently unveiled two designs for the George Lucas Museum of Narrative Art – one for San Francisco, and a different one for Los Angeles.

The firm is also working on a concert hall in Beijing with a translucent facade, and is competing for the contract to overhaul Paris' Tour Montparnasse. 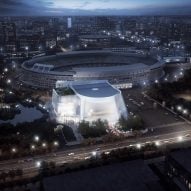