The problem with Britain's railway stations isn't anything to do with style, it's that they are all just malls waiting to happen, argues Owen Hatherley in his latest Opinion column.

It never usually bodes well when a government minister decides to pass judgment on architecture. And so it was when John Hayes – the newly appointed transport minister in the UK's conservative government – gave a speech promising to "challenge an orthodoxy, and give notice to the determinist doubters and defenders of the indefensible that, during my time as Minister of State for Transport, in respect of the built environment, I will turn the tide".

What orthodoxy was this, you might wonder? Well, the orthodoxy was brutalism, that long abandoned and – at least, in fashionable metropolitan circles – nostalgically recalled subgroup of modernism that thrived roughly between the late 1950s and the early 1970s. Brutalism, he insisted, still has a terrible grip on British architecture. "Be warned!" he cried. "The descendants of the brutalists still each day design and build new horrors from huge concrete slabs to out-of-scale, rough-hewn buildings, and massive sculptural structures which bear little or no relationship to their older neighbours."

Yet looking at the new architecture of London, Manchester, Birmingham, Newcastle or Glasgow, concrete slabs are few and far between. So what was this all about, and why has the minister with responsibility for transport decided to wage this strange campaign?

There are barely any brutalist structures in British transport architecture

The only building Hayes specifically attacks in his bizarre tirade is London's Euston Station, long a punching bag for the failings of modern transport architecture. Visit Euston today, and it's a little hard to see why. Compared with the gross chaos of the impeccably Victorian Victoria Station – where a neo-baroque hotel, a 90s shopping mall, a 30s coach station, and two iron and glass train sheds manage to create between them one of the most filthy, labyrinthine and dispiriting transport experiences in Europe – Euston is clean, simple. Once you're through the admittedly dank, miserable platforms, you find a hall lined with expensive yet subtle materials, leading to a straightforward, enclosed square. These replaced a neoclassical station which is seldom lamented, except when it comes to the blackened Doric arch at its entrance, demolished gratuitously in the early 60s. The replacement has never been forgiven.

For a few years now, a plan has been in place for Euston. In a weird act of architectural necrophilia, the stones of the old arch have been fished out of the River Lea – Hayes speaks of watching this, with much excitement – and it will stand as the forecourt to a new, shiny, glass station-cum-shopping mall, from which the High Speed 2 trains will depart to Birmingham and beyond. 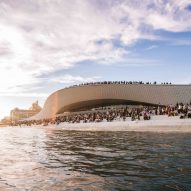 "Building cannot be separated from the economics that drive construction"

What makes the outburst especially inexplicable is that there are barely any brutalist – or even post-war modernist – structures in British transport architecture. You can count the major examples on one hand. Harlow Town, maybe, with its enthusiastic approximation of Fallingwater. Stafford, a genuinely rough and harsh interchange on the West Coast main line. The elegant, laconic – and listed – Coventry Station, more International Style than Brutalist; similarly Milton Keynes, whose Miesian grid stood in for the UN Building in one of the Superman films. And that's about it.

What really happened to Britain's railways in the 1960s was a more subtle form of destruction, where few actual buildings were demolished. Railways were nationalised in 1945, but even then, Britain suffered from the belief that public transport must be profitable. Huge swathes of the British railway network were erased in the 60s, forcing many onto the roads – a policy that is only now, and slowly, being reversed.

In the 1990s, Britain underwent an experiment with privatisation which was, at first, utterly disastrous, until the private company that ran the network, Railtrack, was renationalised around a decade ago. Currently, British railways are managed by an uneasy alliance of the publicly owned Network Rail and a dubious bunch of franchise operators, each with their own ticketing policies, liveries, train types and charming eccentricities, such as the tinnitus-inducing whining noises and smell of faeces that characterise Virgin Trains' Pendolinos. Stations are mostly shabby, their 19th-century shells crammed with kiosks and eateries, managing to make the lofty and sublime into the claustrophobic and mean. But now, according to Hayes, "because of the government's colossal investment in new transport, we have a unique opportunity to be the vanguard of a renaissance".

For a look at what that renaissance might mean, you could visit any of the stations recently rebuilt by Network Rail. Hayes mentions St Pancras and King's Cross, London's two hugely contrasting northern terminals; both have recently been renovated and extended, very successfully in the case of King's Cross, more ambiguously in the maze-like, subdivided, kitschy St Pancras.

On the other hand, he could mean London Bridge, where ersatz Georgian arches lead to a new hall of great proportions and gimcrack details. He could be thinking of Newport, an "iconic" design value-engineered into corrugated iron grimness. Or possibly Dartford, a galumphing purple and green canopy over a frosted glass image of Mick Jagger. Or, perhaps, Birmingham New Street. This rebuilding of a genuinely awful 1960s rebuilding of a Victorian station was nominally designed by Foreign Office Architects, but any finesse in the curved hall they designed has been ground down by the contractors into an ETFE blob that is already wilting at the corners. To the outside is a silvery facade, broadcasting adverts rather than travel information, and where you would expect the name Birmingham New Street, you find Grand Central – the name of the shopping mall that inhabits most of the new building.

Maybe this is exactly the problem Hayes is talking about, and the engineers and international modernists responsible for this lot are the "heirs to the brutalists", but it seems unlikely. What is really happening is a familiar tactic in contemporary political debate – the culture war. Hayes is an ordinary bloke, he doesn't like that modern stuff. He'll make us great again by going back to the glories of the Victorian age, when we were pioneers, by gad!

With a good culture war, you can ignore the indisputable fact that most continental European stations are vastly more well-made and well-managed (what have those Eurocrats to teach us, eh?), and ignore the institutionalised meanness that makes British transport architecture so grim. The value engineering, the ruthless contractors and cowed architects, and the notion that every station is a mall just waiting to happen. Instead, we can argue about whether or not the new mall, through which you can weave your way to get to your overpriced train, will have a reconstructed Doric arch at its entrance or not.