Wooden structural elements at this loft apartment in Brooklyn were uncovered and retreated during renovation work undertaken by local studio General Assembly.

The Gowanus Loft occupies a portion of the top floor of a converted factory, once used to spin jute vegetable fibre into coarse threads.

The building is located in the typically industrial west Brooklyn neighbourhood of Gowanus, which is undergoing rapid regeneration.

Recently completed projects in the area include the transformation of a factory into a colourful co-working space and a house shielded by a metal mesh screen.

General Assembly wanted to retain the character of the apartment's original features, but turn it into a brighter and more desirable home.

"This loft in a former jute mill was in a state of disrepair when we got our hands on it," General Assembly told Dezeen. "Our approach was to combine many of the original elements with modern touches to create a space with a clean, contemporary, yet raw feeling."

The first task was to reorganise the layout, which was preventing light from reaching some of the key spaces. The solution was to form an open-plan living, dining and kitchen space at one end.

"We started by redesigning the plan and opening up the kitchen to take advantage of the natural sunlight from the window-wall encompassing one full side of the apartment," said the studio, which recently added a charred-wood pool house to a property on Shelter Island.

Private spaces including a bedroom, bathroom and office space are each enclosed at the other end of the property, with sliding doors used to conserve space where necessary.

While stripping back the existing fittings, the designers exposed the chunky wooden columns and beams that support the pitched ceiling – also made from timber.

"We tore open the ceiling and sanded down the beams to reveal the original woodwork throughout," said General Assembly.

New additions include concrete counters and a black paperstone breakfast bar, with sides covered in grey tiles laid to form a chevron pattern – also used behind the sink in a lighter colour.

Hexagonal green-grey tiles on the kitchen floor also cover the bathroom walls, while polished concrete was chosen for the rest of the flooring.

"Brighter elements like rift white oak cabinetry work to further reflect the light and contribute to the feeling of open airiness throughout," the studio said.

With an abundance of disused industrial buildings, Brooklyn has seen an explosion of loft apartment conversions during the past decade.

Similar examples include a home where three white boxes form the bedrooms and an flat that features a mezzanine play area. 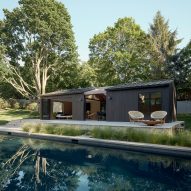