Spheron Architects has completed a small wooden chapel for the Belarusian community of north London to commemorate victims of the Chernobyl nuclear disaster.

The Belarusian Memorial Chapel stands in the grounds of Marian House – a cultural centre for the Belarusian community in Woodside Park – and features a decorative shingled roof.

It is dedicated to the memory of victims of the 1986 Chernobyl nuclear disaster.

The explosion at the Chernobyl nuclear power plant killed 31 people in the immediate blast and exposed 8,400,000 people in Belarus, Ukraine and Russia to radiation, according to a United Nations report.

It displaced thousands, forcing many Belarusians to settle in countries including the UK.

Spheron Architects director Tszwai So spent time in Belarus researching the design of traditional churches, including those abandoned following the Chernobyl nuclear disaster.

The timber-framed structure features a domed spired and a pitched shingled roof in reference to these rural churches.

"We have sought to achieve a thoughtful blend of traditional Belarusian and contemporary design, and hope that our chapel will be loved and well-used by the Belarusian community in the UK," said So.

The 69-square-metre structure, which cost £364,000 to construct, replaces a temporary worship space inside Marian House.

It features some contemporary takes on traditional styles, including its subtly undulating side walls.

Clerestory glazing and tall frosted windows bring natural light into the church during the day, and allow its artificial lighting to shine out at night.

The interior, which is large enough for a congregation of 40, is decorated with timber screens depicting historic icons.

"This project is saturated in Belarusian historical and cultural symbolism, while also firmly embedded in UK architectural innovation," said Mikalaj Packajeu, chair of the Association of Belarusians in Great Britain. 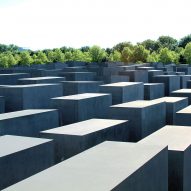