With 2016 drawing to a close, we're continuing our review of the year by looking back on some of the best transport designs, including a driverless car with a lift-up roof, a motorcycle that can't fall over and a 3D-printed wheelchair.

The most impressive concept car of the year came from Renault, and featured a roof that "opens like the lid of a jewellery box" and a futuristic-looking red windscreen.

Unveiled at this year's Mondial De L'Automobile Paris, the Renault Trezor is an all-electric, two-seater vehicle with autonomous driving capabilities and a number of touch-screen controls.

Find out more about the Renault Trezor concept car ›

This year saw BMW present its vision for a future where motorcycle accidents "a thing of the past".

The zero-emissions Motorrad Vision Next 100 incorporates a self-balancing system that BMW claims will protect the rider from any accidents and liberate them from the need to wear a helmet.

Find out more about BMW Motorrad Vision Next 100 motorcycle ›

Following the fatal crash of the SpaceShipTwo in 2015, Virgin unveiled its new Virgin Spaceship (VSS) Unity earlier this year, and announced plans to start tests in California and New Mexico.

Virgin Galactic owner Richard Branson said the spacecraft comes with "new bells and whistles", though the company was vague about how the new plane's technology differs from SpaceShipTwo.

The 3D-printed Go chair was the result of six months of research with wheelchair users and medical professionals. Its features include a made-to-measure seat and foot bay.

According to the manufacturer, users enter the one-seater vehicle and input their final destination using a 12-inch touch screen in front of the seat. The vehicle's computer then calculates the quickest and safest route, and transports its passenger there.

London studio PriestmanGoode aimed to tackle the problem of overcrowding on trains with its big concept of 2016.

Challenging people to rethink how they sit on their commute, the studio launched two new seating models that would increase seating capacity by up to 30 per cent per train carriage. It claims these seats could be rolled out within a year.

There were several news announcements in 2016 from Hyperloop – the conceptual high-speed transport network conceived by billionaire entrepreneur Elon Musk. But the most impressive was a proposal by Bjarke Ingels' firm for a 12-minute connection between Dubai and Abu Dhabi.

BIG proposed a fleet of capsules, which travel through a network of elevated tubes to their destination.

In a year filled with extravagant concept cars and self-driving vehicles, transport design was also applied to the humanitarian crisis.

The OX flat-packed delivery truck, created by engineer Gordon Murray, is designed to be easily disassembled and packed away in under 12 hour. It aims to provide remote parts of Africa with transport for both everyday living and emergencies.

With the race towards driverless vehicles speeding up, a group of researchers from MIT developed a conceptual traffic system that would enable self-driving cars to whizz through intersections without colliding, eliminating the need for signals.

Their system would use sensors to keep driverless cars at a safe distance from each other, as well as allocating each car with a crossing slot as it arrives at a junction, and automatically adjusting speeds on approach.

The Flying Bum takes to the skies

It might not have been the year's best transport design, but it is the one that captured the most hearts. Affectionately dubbed the Flying Bum for its shapely posterior, the Airlander 10 is a hybrid plane-airship that could theoretically stay airborne for five days.

It was observed on several test flights in the British countryside this year, including one where it slowly nose-dived into a field.

See more about the Flying Bum › 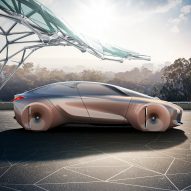 Dezeen's top 10 visions for the future according to 2016