Wooden slats arranged to create a houndstooth pattern cast shadows across this cafe in Dallas by local studio Official, which also designed a hidden cocktail bar at the back.

For the newest branch of Houndstooth Coffee at Sylvan Thirty, south of the Texan city's downtown area, Official used the company's motif to inform elements of the design.

The most prominent example is a facade covered in diagonal batons that form a pattern known as houndstooth – an interlocking check of four-pointed shapes most commonly found in black and white on textiles.

"We wanted to build on the success and design vocabulary of the existing locations yet create a unique identity for Sylvan Thirty," said Official founders Amy Wynne and Mark Leveno.

These windows screen a covered patio area, which provides seating for customers, from the street. Further tables are found inside the main room – a predominently white space that is naturally illuminated from three sides.

In the centre, the service area sits below a large volume that the architects refer to as "the cloud".

This element is clad with vertical white-painted wooden batons, and tilts up at one end to direct customers to where they can order.

"The loftiness of the space with natural lighting creates a fresh openness and the cloud serves as a visual focal point to balance the space," they said.

This Houndstooth Coffee location also incorporates a cocktail bar called Jettison, tucked away behind the cafe.

Connected by a corridor, the two spaces can be separated by sliding doors so they operate independently when necessary.

Official wanted a contrast between the atmospheres of the bar and the cafe, so used a much darker palette to decorate the smaller room.

"We developed a concept of day to night with Houndstooth taking up the larger, more sunlit space and Jettison as a more intimate space for cocktails and conversation," said the architects.

An opening in the lowered ceiling exposes the timber roof trusses, which are highlighted with a warm glow.

"The bar has a relatively low seating capacity with an emphasis on quality drinks and food in a more classic bar atmosphere," the studio said. "The furniture is flexible to allow for a long communal table or smaller group seating." 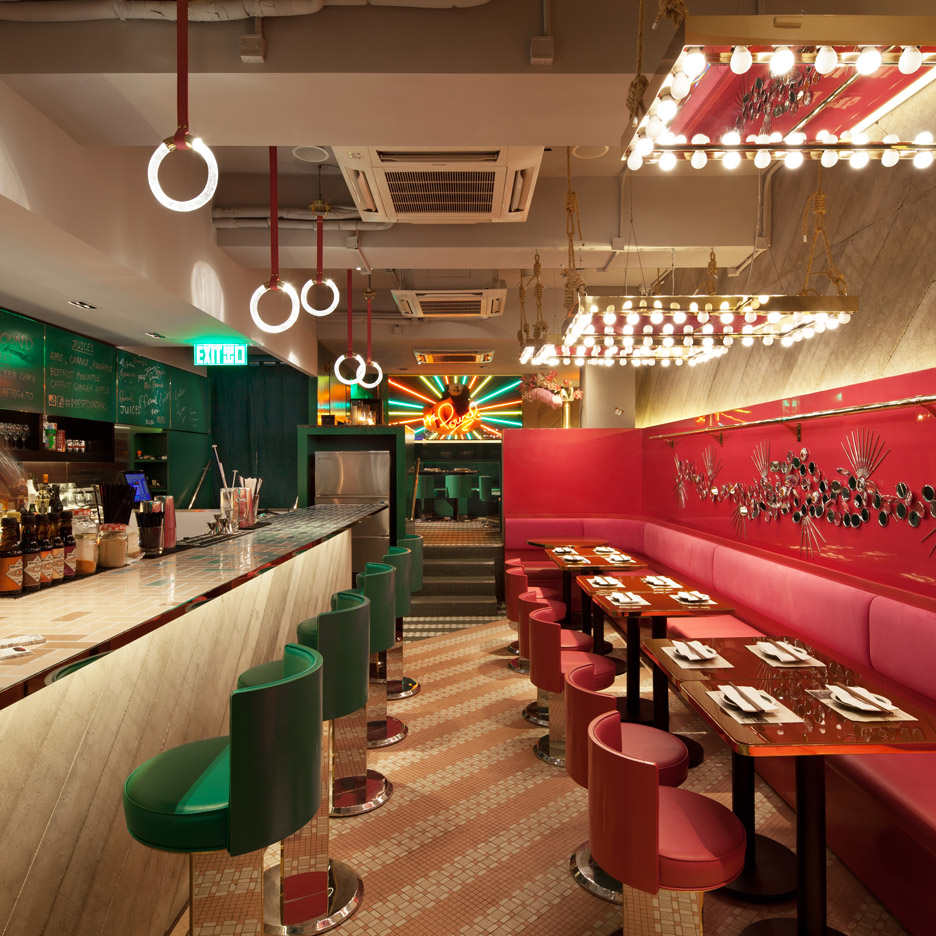 Gold accents used on lighting fixtures and other details help to tie the spaces together. The furniture is a combination of pieces from local and national designers.

Other spaces that serve both caffeine and alcohol include a marble-lined spot in London's historic Royal Exchange building and a neighbourhood hangout in Seattle.

Photography is by Robert Tsai, unless stated otherwise.