Called Atlantic, the home is located in the Hamptons hamlet of Amagansett and is just steps from the beach.

Its design was influenced by a US Life-Saving Service station across the street, which was built over a century ago to help distressed mariners.

"The station is part of a network of structures used to provide rescue and relief for shipwrecked sailors, and it was from this station that a guard once discovered Nazi invaders coming ashore during world war two," said Bates Masi + Architects, a local firm known for its modern beach cottages.

Clad in weathered cedar shingles, the historic station consists of a lookout tower, cupolas and elevated decks. Inside, large, open rooms have exposed beams from which boats and gear can be hung.

"Taking cues from this structure, the design of the new residence strikes a dialogue with the landmark to enrich the experience of the new home and celebrate the local history," the studio said.

Topped with a large, flat roof, the rectilinear dwelling has an upper level that cantilevers over the ground floor. A window wall provides sweeping views and is shaded by a deep eave.

Weathering steel wraps the base of the cottage, while higher up the exterior walls are clad in thick cedar boards affixed to bronze bars.

The team developed a system that enabled the wood siding to be hung without being fastened into place, allowing the boards to naturally expand and contract as the temperature and humidity levels change.

The materials were selected for their proven durability in coastal environments.

"As each material weathers over time, the appearance of the siding will record the cycles of rain, sun, freeze and thaw," the firm said. The cedar will lighten, while the bronze will develop a dark brown patina and the weathering steel will further rust.

Encompassing 3,000 square feet (279 square metres), the cottage has two guest suites and a family room on the ground level. A retractable glass wall fully opens up to the backyard.

The upper storey contains entertaining and living spaces, along with a roof deck lined with glass railings.

"To minimise the impact of the footprint on the sensitive ecological environment, the main living area is stacked above the bedrooms, and, like the lookout towers of the stations, an even higher roof deck provides elevated views of ocean," the firm said.

Inside, an exposed steel structure defines the main living spaces and forms a framework to which "other functions can be hung".

"The main stair is strung from beams above, and the rods used to support each tread serve as guardrail for the stair," the architects explained.

Light fixtures and a swinging chair are also suspended from the overhead beams.

Other Long Island projects by Bates Masi include a home with sprung cedar boards that can be acoustically "tuned" and a dwelling whose form references the area's traditional potato barns. 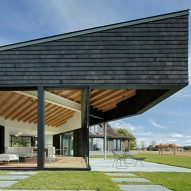 More projects in the Hamptons