Architecture for London has created a pair of contrasting extensions for adjoining houses in east London, using pale brick for one and dark slate for the other.

With the demand for contemporary house extensions continuing across the UK capital, the London-based firm designed the Tower Hamlets Tandem project for two neighbours who wanted to extend their attached properties at the same time.

The architects added a two-storey brick extension – chosen to match the local material palette – to the back of each terraced residence. They also added a single storey side-infill topped with a skylight on either side.

Steps now lead from the existing living areas into the open-plan kitchen and dining rooms contained in the extensions, which feature large glass doors that open to the garden at the rear and bring natural light into the interior.

"These larger spaces form generous, light-filled rooms for the families to enjoy and are connected straight onto their gardens," said the architects.

As the additions are identical in shape and size, the architects chose different finishes to the exterior and interior of each property to reflect the neighbours' individuality.

One of the owners opted for a plain brick exterior with sliding glazing. Inside, resin and aggregate flooring covers the kitchen, which also features white cabinets topped with custom-made blue quartzite worktops. Smoked oak floor boards continue through the rest of the house.

For the second house, the garden-facing extension is clad in pieces of titled slate. Soap-washed douglas fir boards cover the floor of the living room, matching the cupboard doors in the kitchen behind.

Polished concrete is used for the floor of the kitchen, alongside copper detailing and exposed ply edges – one of a number of natural materials inside the home.

By extending side-by-side, the residents shared the overall costs in a move the architects said could provide an economic model for Londoners living on a budget in terraced housing.

The planning application also benefitted from a partnered approach to the development of the first floor, while other solo applications on the street have been rejected.

"It's unusual to work on neighbouring houses in this fashion but it has huge benefits in London's complex planning environment," said studio director Ben Ridley.

"Taking on such a challenge is a big commitment for the homeowners but it’s one that pays off in terms of value and the aesthetic impact on each home," he continued. 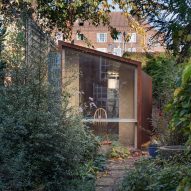 Architecture for London was set up by architect Ben Ridley in 2009. Past projects by the design studio include another London house extension, featuring stainless-steel surfaces and a polished concrete floor.