British photographer Alastair Philip Wiper has gone behind the scenes at a Danish factory to reveal the setting where canned pork is produced.

Three years after touring one of the world's largest slaughterhouses, Wiper explored the Vejle production plant of Tulip Pork Luncheon Meat, the main rival of the Spam brand, and one of the world's biggest exporters of so-called meat in a tin.

His photography series, called Where Spam is Born, shows the complex conveyor belt system used to transform meat offcuts into a canned product, under strict safety and hygiene standards.

Here, he reveals the story behind the brand:

In my day it was all about Spam. A cultural icon worthy of ridicule by Monty Python in the 1960s, and the moniker given to one of the biggest pests of the information age, this humble brand of meat in a tin was the renowned – if rarely proudly eaten – household name when I was growing up in England in the 1980s. But throughout much of the rest of the world, meat in a tin is known equally by another name: Tulip Pork Luncheon Meat.

"It's very much the same thing as Spam," explained Stig Pedersen, plant manager at the Tulip factory in Vejle, Denmark, where over 130 million cans of Pork Luncheon Meat are produced each year.

"We are actually competing with the Spam brand worldwide – for instance in Okinawa we are big competitors."

From this factory, which opened in 1988, Pork Luncheon Meat is exported to over 100 countries.

"Sales are going up all the time. Canned products are not very sexy in Denmark – we only really use tomato and tuna and a few other things," continued Pedersen.

"The product Pork Luncheon Meat is not a familiar product in Denmark at all – most Danes wouldn't know what it is if you asked them. But outside Denmark it is very well known. In England and Germany, canned products are huge, and then we have very big markets in places like Okinawa, Korea, Panama, Puerto Rico and Papua New Guinea."

Not only is Pork Luncheon Meat well known abroad, it is often considered a delicacy. Wherever American troops have been stationed, they have brought Spam and Pork Luncheon Meat with them – its high protein and fat content, and shelf life of at least five years, has always made it a very practical addition to ration packs.

Not only is Pork Luncheon Meat well known abroad, it is often considered a delicacy

In Vietnam, one of the countries with the most vibrant cuisines in the world, slices of Spam wrapped in banana leaves sit in the middle of the table at many local restaurants.

The story goes that, during the war with the Americans, the Viet Cong would steal their supplies. Because of this, they discovered Spam, which they promptly acquired a taste for. Apparently there is nothing better to warm the cockles of any old timer's heart in Vietnam than to give them the gift of a tin of Spam.

"It's true, in Vietnam, they sometimes have alarms attached to the tins in the stores to stop people stealing them" said Michael Ravn, head of communication at the Tulip company. "The same happened in Okinawa – the American troops had it in their ration packs, and now Okinawa is one of the biggest markets, and Pork Luncheon Meat is regarded as a delicacy."

"In Japan it is very common to use Pork Luncheon Meat as a gift for the host when you visit friends and family," he continued. "They make gift boxes of Pork Luncheon Meat that you can bring in the same way that we would bring a nice bottle of wine."

In Vietnam, slices of Spam wrapped in banana leaves sit in the middle of the table at many local restaurants

"They also do that in Korea" added Pedersen. "A lot of the niche markets we are in are because of the presence of American troops, and that's how the locals started to eat Pork Luncheon Meat."

"There are 1.5 million people living in Okinawa, and they consume 3,500 tons of Tulip Pork Luncheon Meat per year. And they also eat Spam on top of that. If you measure per head, Okinawa is our biggest market. It is amazing how much they eat."

The popularity of Pork Luncheon Meat doesn't stop in Asia. "One of our export consultants went on a boat trip up the Amazon River, and sometimes there are small piers where you buy gas for your boat," said Ravn.

"You can also buy Coca-Cola, and Tulip Pork Luncheon Meat. Just those three products. Our products are also very popular in shelters, so when hurricane season comes along our sales go up."

But what exactly goes into Pork Luncheon Meat? It's all ground-up eyeballs and testicles right?

"No," said Ravn with a smile. "This is great quality meat. We are not putting eyes and testicles in there – it is high quality, and that is why it is so extremely popular."

"Around the world there is a perception that at Tulip we have world-class standards regarding food safety. We like to call ourselves world champions of food safety. We have every kind of international certification you can get. That means a lot for consumers around the world – being 'Danish' is associated with high quality and safety."

"We buy what are called 'trimmings' from the slaughterhouses – the bits of meat that are cut away by the butchers from the main cuts," explained Pedersen.

"They are perfectly decent bits of meat, they are just too small to be sold on their own as part of the main cut. That is what Pork Luncheon Meat is made of. It includes ham, shoulder, shank, tenderloin, loin, belly and other normal cuts of pork."

The biggest supplier to the factory in Vejle is the Danish Crown Slaughterhouse at Horsens, which I have also photographed.

"In general terms, we get the cuts of meat, mince it, put it in a can, and that's it," added Ravn.

Pork Luncheon Meat has an expiration date five years from the date it was produced. But Pedersen claimed that one member of staff opens cans that are 15 to 20 years old, and still finds the contents edible.

"Perhaps they have a slightly metallic taste, but in terms of food safety it is not a problem," he said. "As long as the can is intact, they can easily go much longer than five years. But some of our retailers would rather we only gave three years life because they think people will perceive it as a better product."

The long life of the product is attributed to a combination of the addition of food-safe preservatives, the vacuum sealing of the tins, and the heating of the meat to a temperature that kills all traces of bacteria.

"We don't have anything to hide," said Ravn. "There is nothing that needs to be swept under the carpet, so why not be open about it?"

"We are not shy or embarrassed about what we do – actually it is the opposite, we are proud of these facilities and our products. We are aware that, here in Denmark, canned meat is not perceived as a delicious, high end product – but it is in other parts of the world. We think it is a really good product."

Most people are happy to devour frankfurters like they are going out of fashion, and yet grimace at the idea of a product like Pork Luncheon Meat

Our idea of industrial scale food production, especially when it comes to meat, is a complicated one. Most people, Danes in particular, are happy to devour frankfurters like they are going out of fashion, and yet grimace at the idea of a product like Pork Luncheon Meat.

What I saw at the factory in Vejle, while perhaps being slightly unappetising due to the sheer scale of the endeavour, was very simple and clean. Pieces of pork go in, get minced up, spices and food safe preservatives are added, it gets put in a tin, sealed and cooked.

The question is, did I taste some?

While shooting still lifes of the tins in my studio, I began to psych myself up. I had been to the slaughterhouse where the pigs are slaughtered and butchered, and I had been to the factory where the meat was turned into this product. I am not squeamish and I had been satisfied, perhaps even impressed, by the safety and cleanliness of the process. So why did I need to psych myself up? It turned out, confit de canard excluded, meat in a can just really isn't that sexy after all.

I called my wife into the studio to give me support and witness the tasting. "What is that smell?" was her first comment. It's true, there was a certain aroma, lingering somewhere between memories of 80s school dinners and dog food.

I explained my mission to her. "Why the hell do you want to do that?" she asked, looking horrified. As I waffled on about sense of adventure and journalistic integrity, I felt my determination slipping. "Why don't you at least cook it?" she asked. "Do you really have to eat it straight from the tin?"

She got me there. With a sense of relief, on went the cling film; into the fridge the Pork Luncheon Meat disappeared. 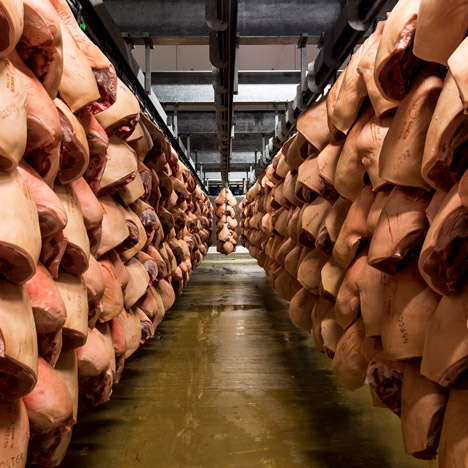