This daybed by Korean designer Hyung Suk Cho blends elements from traditional Korean furniture with the needs of modern houses.

Created as part of an ongoing exploration into ways traditional Korean elements can be incorporated into furniture, Blank is designed to be "halfway" between a sofa and a bed.

As such, it features a wide flat seat covered by a long cushion and another pair of removable cushions that form the backrest.

The seat rests atop a single piece of wood, while the base features three horizontal slats of wood that support the sofa.

The sofa, which was made for local brand Munito Furniture, is supported by a wooden ash framework, which borrows on classic "rustic" Korean shapes.

The designer also referenced principles of negative space from Korean paintings while creating the furniture.

"Blank has two aspects, it's modern but also classic" said the designer, who has created several pieces of furniture including a minimal chair made of curved wooden shells, and a sofa created using upholstered blocks 'trapped' in metal cages.

"I think this sofa is going to be able to convey a variety of feelings depending on the space it's placed in," he added.

Hyung Suk Cho previously designed a sofa that was made up of two cushions held tightly in a metal frame.

Several other designers have incorporated elements of tradition into their furniture, including Studioilse which worked with a UNESCO-nominated carving technique, and Jeong Yong who created a pair of chairs based on patterns often used for traditional Korean houses and furniture. 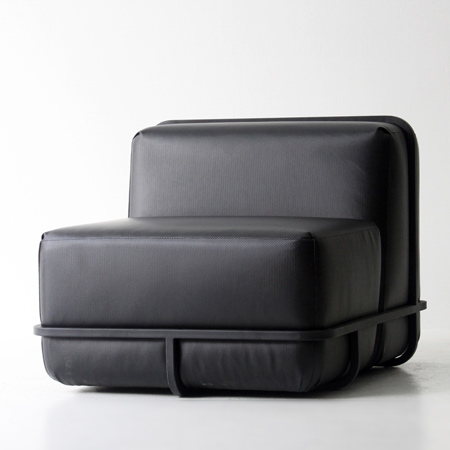