Danish brand Menu has extended its collection of minimal furniture, lighting and accessories based on the modernist principles of Scandinavian designers and architects.

The Modernism Reimagined collection will be on show at the January edition of Maison&Objet in Paris, taking place later this week.

First launched at the trade fair's September edition in 2016, the collection features furniture, lighting and home accessories inspired by the minimal design and architecture to come out of Denmark.

Each piece is tailored to modern living, with furniture intended to suit both large and small homes.

"Inspired by Denmark's modernist legacy, we give human and aesthetic appeal equal consideration during our design process," said the brand.

"We give our products a very simple aesthetic to make sure that whatever you take home today won't find itself replaced next year."

The new additions include pieces by Form Us With Love, Norm Architects and Swedish studio Afteroom.

Among the new furniture is a series titled Cage, which includes a table made up of a marble top and slender steel legs that cross over one another.

Norm Architects' Copenhagen Tray Table is designed as a combination of a traditional tray and small side table, while its Plinth is a solid marble block intended for a multitude of uses.

German designer Theresa Arns has created a sofa named Septembre made of a bent wooden frame and plush upholstery, as well as the Turning Table, which features a hidden storage compartment under a rotatable lid.

The Tailor Sofa by Rui Alves was inspired by the memory of his grandfather's favourite tailor shop. It has a structured upholstered section supported by an exposed wooden frame.

Taiwanese designer Kenyon Yeh's addition comes in the form of a side table that leans at a 90-degree angle against a wall for support.

Norm's Socket Occasional Lamp is a result of research exploring the boundaries between minimalist sculpture and practical everyday objects, and Tom Chung and Jordan Murphy's Cast Pendant takes inspiration from the traditional plumb weight. This kind of device, with a weight hanging from a line, has been used by masons and carpenters since Ancient Egypt to establish a true vertical.

New accessory releases range from mirrors to vases and clocks.

A standout piece from the accessories range is a giant vase named Echasse – French for stilts. Designed by Arns, the round-bottomed vessel is supported by a slender, four-legged frame.

The range's Darkly Mirror by Nick Ross is described as an exploration of the history of human beings' relationship with the reflected image, and takes inspiration from ceramic bowls. 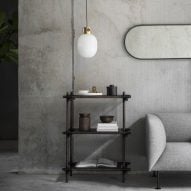 The Modernism Reimagined collection will be on show at this month's Maison&Objet, which takes place in Paris from 20 to 24 January. The event's designer of the year is Pierre Charpin, who will be showcasing his work in a self-designed hub.