Work is nearly complete on a major expansion to an urban Japanese garden in Oregon – the first public commission in America for architect Kengo Kuma.

The serene park – which encompasses nine acres (3.6 hectares) on a hill near downtown Portland – is considered one of the most authentic Japanese gardens outside of Japan.

The garden opened a half-century ago and now draws more than 350,000 annual visitors. Expansion plans were first announced in 2015.

The $33.5 million (£27 million) project calls for preserving existing gardens while adding new structures organised around a central courtyard – a complex referred to as the Cultural Village. The scheme draws references to Japanese gate-front towns that surround sacred shrines and temples.

"Given its proximity to nature, Portland is unlike any place in the world," said Kuma, who founded his Tokyo-based practice in 1990. "This new Cultural Village serves as a connector of the stunning Oregon landscape, Japanese arts and a subtle gradation to architecture."

The complex accommodates a varied program. The courtyard will serve as a gathering space and performance venue, while horticultural workshops will be offered in a new garden house.

An arts learning centre contains galleries, a multipurpose room, a library and a gift store. Situated in the heart of the village is an intimate tea cafe made of wood and synthetic fibre.

"Constructed using Port Orford cedar and Tyvek, which emulates rice paper, the cafe floats in nature and fuses harmoniously into its surroundings," the team said. "Its unique location cantilevers over the hillside at the east side of the village and will provide scenic views of the area’s surrounding beauty."

The cafe will sell beverages and products from the storied Japanese tea shop Jugetsudo, for which Kuma has designed locations in Tokyo and Paris.

The village structures have green roofs that absorb rainwater and prevent run-off. "From a design perspective, the living roofs are likened to the thatched roofs of traditional gardens in Japan," the team said.

The west end of the Cultural Village is lined by a medieval-style wall that stretches 185 feet (56 metres) and rises 18.5 feet (5.6 metres). The wall was constructed using traditional tools and techniques, with the process being led by a 15th-century master stonemason.

The project also entailed relocating the park's main entrance to the base of the hill, where a new water garden with cascading ponds is meant to aid “in the transition from city to tranquillity”.

Two additional gardens were created within the park: a bonsai terrace and a tiny urban garden, or Tsubo-niwa, in the new courtyard.

Kuma worked with the park's curator, Sadafumi Uchiyama, a third-generation gardener, to conceive the expansion – described as "an immersive, fluid journey from beginning to end".

Rather than enlarging the park’s footprint, the team was able to optimise 3.4 acres (1.4 hectares) of the existing site.

"The garden's new Cultural Village will not only provide additional space to accommodate its rapid visitor growth, but also – and most importantly – enhance its ability to immerse visitors in traditional Japanese arts and culture," the team said.

"Kuma designed the new Cultural Village, his first public commission in the US, to honour the singular experience of each visitor and ensure the serenity is protected for future generations."

Kuma – who ranked at number five on the Dezeen Hot List – said he is drawing on his experience in Oregon for other projects, including the arena he has designed for the 2020 Tokyo Olympics. 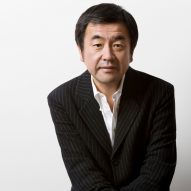 "I feel embarrassed by some of my buildings" says Kengo Kuma

"Working with the Garden has influenced my approach to future projects, especially integrating green and wood," the architect said. "For example, the National Stadium in Tokyo will be rich in vegetation, evoking a feeling of forest in the city."