Foster + Partners has won a competition for a complex of stepped towers in Mecca, Saudi Arabia, providing accommodation for pilgrims en route to the world's largest mosque.

Foster + Partner's design will be located between the Haramain High-speed Rail Station and the Grand Mosque, making it a key part of the pilgrims' journey towards the mosque's Holy Kaaba building in Mecca, or Makkah.

The mixed-use scheme will include luxury hotels and apartments for the rapidly growing number of visitors passing through Mecca.

Clusters of vertical structures will be arranged in a stepped formation that references the dense urban plan of traditional Arabic cities, as well as the rolling shape of the surrounding mountainous terrain.

"Makkah (Mecca) is one of the most unique cities in the world," said Foster + Partners senior executive partner Luke Fox. "As the home of the Holy Kaaba – the holiest site in Islam – it presents a special challenge and honour for any developer and architect."

"Our design sets out to create an innovative building form that will be respectful to the scale and importance of the Grand Mosque," he continued.

A ramp integrated with the topography of the site will take pilgrims beneath a series of large pillars, which branch outwards as they reach towards the ceiling.

Natural light will flood these pillar-filled spaces through patterned metalwork that is intended to heighten the experience of visiting the Grand Mosque.

"Our endeavour has been to make the experience special and appropriate to its unique location," Fox explained. "The design follows a philosophy of 'luxury with humility' with an understated elegance throughout the development."

Hotel rooms and apartments are orientated towards the holy site. Each bedroom will feature a dedicated space for private prayer and contemplation. Large openings will provide views to the Grand Mosque and Holy Kaaba – a building at the centre of the mosque, which Muslims are expected to pray towards.

British firm Zaha Hadid Architects has also recently revealed plans for a project in Saudi Arabia, a preservation centre for a UNESCO-protected site in Diriyah.

Norman Foster and his London-based firm Foster + Partners was ranked at number 13 in the Dezeen Hot List, a countdown of the most newsworthy players in the design industry.

The Jabal Omar Development is one of a number of grand projects that the firm has under development. Others include Poland's tallest tower, a set of twin buildings for Miami and the second-tallest building in San Francisco. 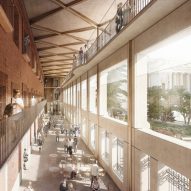