Steven Holl has called for the impeachment of Donald Trump, while Daniel Libeskind has described the US president's recently imposed travel restrictions as "an affront to our freedom and core values".

Both of the prominent American architects sent statements to Dezeen, in the wake of the restrictions Trump put in place for citizens from seven African and Middle Eastern countries last week.

"This action, by the loser of our citizens' popular vote, actively works against the diversity and dialogue essential to this mission and violates the United States Constitution," said Holl.

"This president who repeatedly tells lies, fights human potential for good and defies the constitution must be impeached."

An impeachment would involve charging the president with misconduct – voted for by a majority of members of the US Congress' House of Representatives – then a trial in the Senate, with two-thirds of elected senators voting in favour for conviction.

Libeskind – a Polish immigrant – also fiercely opposed the so-called Muslim ban, and invited others in the architecture, design and construction industries to join his studio's boycott of companies that support the new administration's policies.

"The Trump travel ban is an affront to our freedom and core values," he said. "It affects our employees, colleagues and collaborators."

American-Norwegian firm Snøhetta said it is "preparing for the worst" from the effects caused by Trump's executive order.

"The general disturbance it will create, alongside other similarly problematic policies proposed by this administration, will harm our industry as it harms the country," the firm's partner Elaine Molinar and co-founder Craig Dykers told Dezeen.

All three studios stressed that they employ architects from countries across the globe, and are working on international projects. 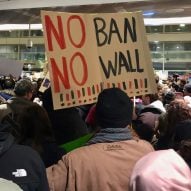 Trump signed the executive order on Friday to restrict citizens of Muslim-majority nations entering the US for 90 days, and to curtail the country's refugee intake for a period of 120 days.

The countries affected are Iraq, Iran, Yemen, Libya, Somalia, Syria and Sudan, chosen on the grounds of alleged potential threats to America.

Since then, protests against the move have taken place worldwide. US tech companies including Apple, Amazon, Google and Airbnb were among those to denounce the order.

Libeskind revealed that nearly a 100 people from his office joined the march against Trump in Washington DC on 21 January 2017 – the day after he was inaugurated.

Many architects and designers were involved in similar protests focused on women's rights worldwide.

Read the statements from Holl, Libeskind and Snøhetta in full below:

Our office of 44 people based in NYC and Beijing has a staff representing over 18 different languages. We are dedicated to an architecture of openness encouraging human potential.

This action, by the loser of our citizens' popular vote, actively works against the diversity and dialogue essential to this mission and violates the United States Constitution. This president who repeatedly tells lies, fights human potential for good and defies the constitution must be impeached.

We have now worked on five continents pursuing our mission (currently working on our first African project, a library for a new campus in Malawi, which is deeply rooted in our core principles). Today, more than ever, we need to pursue our values; green architecture for the environment of future generations, formation of social space, and realisation of new spatial energies.

Studio Libeskind would not exist without immigration.

Daniel Libeskind immigrated to the United States, fleeing persecution and communist rulers in Poland. His wife, Nina, co-founder of the practice, is Canadian. Daniel and Nina run the studio with three partners from the US, Germany and Afghanistan. Our studio in New York is comprised of the most dedicated and talented architects and designers from more than a dozen countries.

On any given day one can hear French, Spanish, Farsi, Italian, German, Chinese, Russian, Hebrew, Dutch, Turkish, Swedish, Arabic, and Korean spoken. This diversity makes us stronger and makes this practice uniquely American, not the other way around.

The Trump travel ban is an affront to our freedom and core values. It affects our employees, colleagues and collaborators. Now is the time for us to join hands and take a stand. On January 21, the studio brought nearly a 100 people to march on Washington DC.

We are actively boycotting companies that support the current administration's policies. But there is still more to do. We invite our colleagues in the architecture, design and construction communities to join us.

Many of our staff, clients and academic connections may be affected by this ban. As of now, we have not yet experienced first-hand effects, however we are preparing for the worst, while simultaneously working to support overturning the Executive Order.

Both the decline in available talent and the loss of opportunity to learn from diverse cultural and educational perspectives will be detrimental. We have always had professional connections to the countries listed in the ban so the Executive Order will keep us, and many others, from operating at our highest professional level.

The general disturbance it will create, alongside other similarly problematic policies proposed by this administration, will harm our industry as it harms the country.

This [ban] is completely counter to our dedication to the promotion of civil space and civil rights. We support diversity in our world. We recognise that some people see this as a security measure – a defence against terrorism. No direct link can be shown that such an order will make anyone safer.

In fact, it will most certainly make things less secure while we lose contact with friends and allies in these strategic countries. Furthermore, the method and style of communication of such orders is exclusionary and offensive.

If we want to discuss the safety of Americans, and others in the US, we should be discussing gun control and improved community policing.