The corners of this aluminium-clad sports hall near the Iranian city of Bastam lift up from the earth to lend the irregular form a "cloud-like" appearance.

The hall was designed by Tehran-based FEA Studio for the Noor-e Mobin Educational and Cultural Institute – a non-profit private boys school based in Bastam.

Apart from a boundary wall and gatehouses, the sports centre is the first structure to be completed on the site to the north of the city.

The school's brief called for a proposal to complement the facilities that will gradually be added to the site, but that also has a unique character.

Rather than sticking to the standard warehouse-like typology that is commonly used for buildings of this purpose, the architects drew inspiration from the surrounding scenery.

"In this site, there is a panoramic view of the clouds, mountains and plains," said FEA Studio.

"The idea was to create a building that would be like part of a natural thing, not only as a building construction, and that will become part of the landscape itself – like a cloud."

The building's proportions are informed by the size of the basketball court it contains, which is also designed to be used for other sports.

An area along one edge of the facility contains a lobby, office, changing rooms, bathrooms, kitchen and storage spaces on the ground floor, with a table-tennis hall accommodated above.

White aluminium-faced panelling forms an angular shell around the structure. On one corner, this surface is sliced away to create a sheltered and welcoming entrance.

The cladding is also raised up along the edge of the main hall. This lightens the building's visual mass and provides views of the landscape from inside the facility.

"Sports halls are usually designed in a way that they do not have a view of the nature," said the architects, "and the connection of inside and outside is based on getting daylight, but we wanted the in-out connection incessantly."

"Therefore, this sports hall is a panoramic view itself, that the entire natural scenes can be observed from its inside."

The double-glazed wall lining the side of the sports hall has a thickness of 18 millimetres, so it can withstand impacts from any balls being bounced against it.

Despite requesting a unique and characterful building, the school also wanted to keep costs to a minimum to achieve a budget of approximately $400,000 (£320,000). 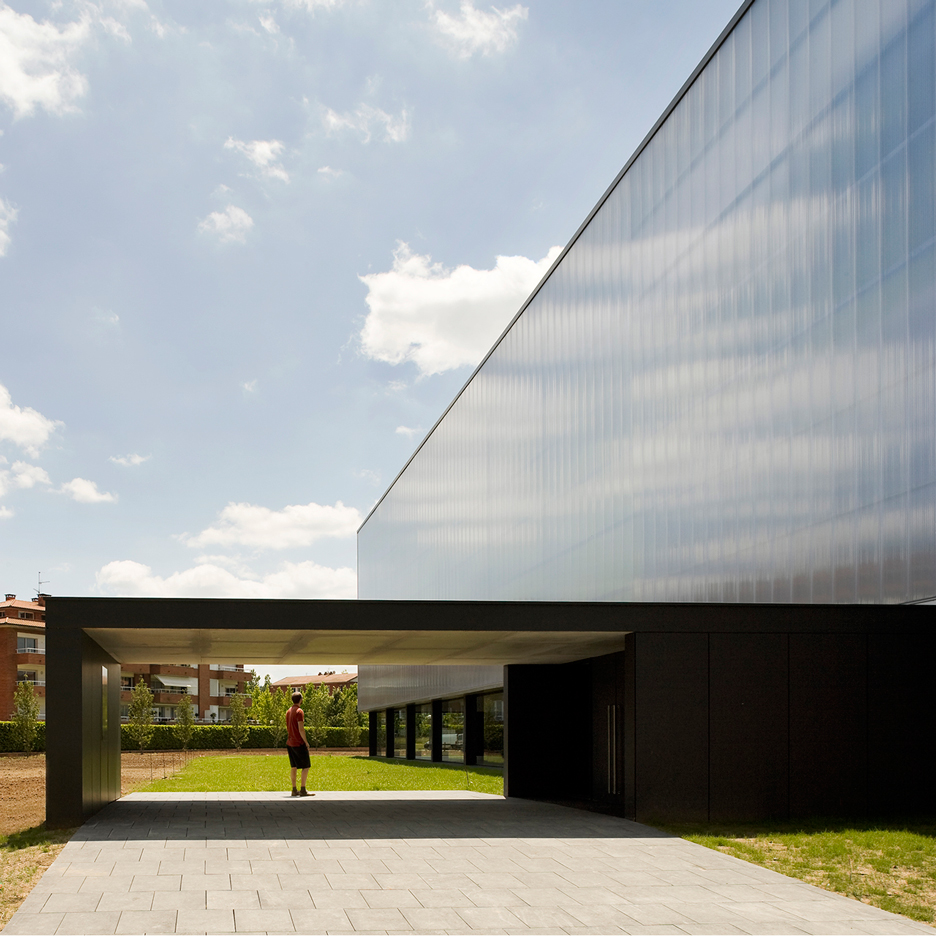 A standard portal frame helped to reduce construction costs, while enabling small adjustments to the form straightforward. The aluminium sandwich cladding is also economical and easy to apply, as well as highly insulating.