Copenhagen designer Martin Solem has designed a table that hides cables inside its legs to avoid messy office spaces.

Each of the four tapered table legs is moulded into a U-shape, appearing solid from the outside but with enough space on the inner surface to store wires.

A internal tunnel of felt protects wires, while also holding them in place and keeping them from getting tangled.

"The Solem table is the result of an engineering exercise following extensive research on bending plywood," said the designer, who previously worked for Danish cabinetmaker Rud Rasmussen, and is now part of the design team at HAY in Copenhagen.

"The design, while being visually elegant and incredibly lightweight, provides solid structural support," he added. "The Solem table embodies modern Scandinavian design with its clean lines, allowing it to be used in a multitude of residential and commercial settings."

The table, which was made for American company Bernhardt Design, has white oak veneer tops and supports made from bent plywood. There's the option to install USB power modules in the desks, and metal trays can also be added underneath the tabletop to manage extra wires or office equipment.

USB power modules can be installed under the desks, and metal trays can also be added underneath the tabletop to manage extra wires or office equipment.

The Solem series comes in several different sizes, from cafe to conference table. Contrasting finishes can also be combined, with special editions of the furniture featuring black or white surfaces with bevelled plywood edges.

Solem's work was featured in New York's A Few Good Things exhibition in 2016, which brought together work by both stablished and promising Norwegian talent.

Another exhibition of Norwegian design, held during Milan, included a set of patterned textiles created by the designer, based on natural materials. 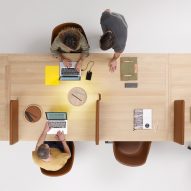