British designer Tom Dixon has unveiled two new lighting designs – a wall-mounted lamp inspired by insulated flasks, and a brass-plated chandelier that can be rotated into different configurations.

The two new pieces, named Void and Plane, were presented for the first time during this year's Stockholm Furniture Fair, which takes place until 11 February.

The shape of Void is designed to reference the thermal flasks used to carry hot drinks.

The wall-mounted lamp features a halogen bulb that creates a soft, directional light. Typical of many of Dixon's products, it's exterior is polished to a highly reflective finish.

Plane is more of a statement piece, intended to be used in rooms with high ceilings – particularly stairwells.

"The brass-plated steel frames planes can be rotated to create different configurations and mysterious optical illusions," said the studio.

Both designs are on show at Dixon's stand at Stockholm Furniture Fair until 11 February.

The designer is also showcasing his first collection of office furniture, which includes a minimalist lamp and a workstation based on archetypical Victorian school desks.

His new range of hand washes and balms, lighting and bathroom storage containers – and even washing-up liquid – are also on show at the stand. 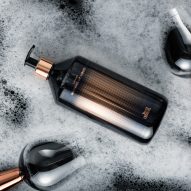 Stockholm Furniture Fair is taking place as part of the city-wide design week, which is on until 11 February.