Architect Rem Koolhaas has expressed his excitement at building in Manhattan for the first time, in a movie created to promote his firm OMA's 121 E 22nd residential tower.

In the film, the Dutch architect speaks about how important it is to him to be working in the city he has studied and admired for the duration of his career.

"Manhattan has been the biggest stimulus of my entire career in architecture," says Koolhaas, whose 1978 book Delirious New York, A Retroactive Manifesto for Manhattan is considered one of the most important contemporary analyses of the city.

"For that reason it's wonderful to actually build in a city that I've always tried to describe and that has really influenced almost every step I took," he continues.

"A building in this city acquires a unique additional charge, and that is very exciting, as an architect, to play with."

The 121 E 22nd project was announced in autumn 2016 and is being overseen by OMA's New York office – headed by architect Sho Shigematsu, who also features in the short film.

Located on a corner site in the Gramercy Park neighbourhood, the building commissioned by developer Toll Brothers City Living will contain 133 homes.

Its two street facades will feature windows that gradually change from recessed glass panels to flush glazing as they move away from the neighbours.

"It starts with punched windows to be very contextual and seamless with the existing buildings," says Shigematsu. "You have this gradient being from very classical to very contemporary towards the corner."

Where the two planes meet, they will join via a series of faceted "prismatic" elements.

Behind the front facades will be a private outdoor space for residents, onto which apartment balconies will face.

"The courtyard is a valley-like shape that maximises its public and private functions, inspired by the neighbouring parks: Madison Square Park and Gramercy Park," Shigematsu says.

Sales for the apartments opened last month, and prospective buyers can find out more at gallery featuring an interactive installation by design agency HUSH. Construction is expected to complete in autumn 2018.

This is the first full building by the studio to go ahead in New York. OMA released plans for a tower at 23 East 22nd Street in 2008, but the project is yet to make it off the drawing board.

The firm has also worked on a variety of interiors in the city, including the flagship store for fashion house Prada and a studio for artist Cai Guo-Qiang, and completed the design for the Manus x Machina fashion exhibition at the Met museum.

Movie is by Brooklyn Digital Foundry. 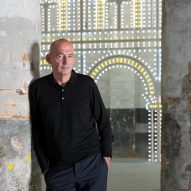