Sydney architecture studio CO-AP has renovated and extended a typical suburban home in the Australian city, adding a two-storey concrete structure that opens onto a garden at the rear.

CO-AP was asked to oversee the restoration and modernisation of the early-1900s home in the suburb of Balmain, which had existing planning approval for an extension.

The client is the owner of a local building firm, who required detailed designs for the extension and interiors to be executed before his company could then carry out the construction work.

Having functioned as a family home for over a century, the building had been subjected to alterations including the introduction of a muddled collection of rooms separating the main living areas from the garden.

"Maximising daylight and green space was a priority," said architect Will Fung of the approach taken during the design process.

"Off-form concrete and Australian timbers were used for the two-storey rear additions which are contained within the existing ridgeline set out in the original planning approval," he added.

The alterations are almost impossible to discern from looking at the building's existing gabled facade. A skylight set into the corrugated metal roof is one of the only new elements visible from the street.

This opening and a large window facing the neighbouring property channel daylight into a new stairwell at the centre of the house. Further skylights illuminate the bedrooms on the upper floor.

The two-storey extension occupies an area to the rear of the building that could have been given over to parking with rear-lane access. Instead, the client chose to improve the existing garden.

A new living and dining area looks out onto the garden through full-height sliding doors that connect this space with outdoor decking.

A bedroom on the first floor features a fully retractable window that opens onto a raised planter filled with succulents that provide some privacy and a visual connection with the garden beyond.

The clear separation between the existing spaces at the front of the house and the new addition is highlighted by the transition from wooden floorboards to the concrete surfaces of the extension.

Materials salvaged from the original building including structural timbers are repurposed in the new spaces to provide a symbolic link between the property's two distinct parts.

"I don't believe in trying to pretend that something you've just built has been built in another era," builder and developer Mathew Wilk explained.

"It is clear where the old house ends and the new house starts, with recycled timbers used in the floor, stairs and shelving from the old demolished floors creating a notional bridge from new to old."

CO-AP's other projects in Sydney have included the addition of a living space and garden on the rooftop of an apartment building in the Darlinghurst suburb. 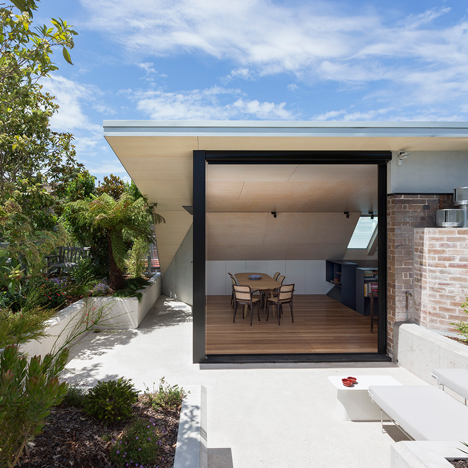 CO-AP creates rooftop oasis for residents of a Sydney penthouse

Photography is by Murray Fredericks.