Confronting his own mental health issues and giving in to "morbid curiosity", the photographer set about exploring the North American facilities where many patients in the 19th century spent most of their lives institutionalised.

These grand buildings were used up until the 1950s, when less isolating methods of care were introduced. The wards were left in various states – some completely empty, and others still with all the furniture and equipment in place.

Van der Velde's images are compiled into a book titled Abandoned Asylums, available through his website, and he describes the series and his experiences in this essay for Dezeen:

As a past member of the Canadian Forces infantry, I like many others am not immune to mental illness, and depression is something I've always unashamedly carried around.

Exploring and photographing these former institutions offered me solace in seeing first hand how far we've come, and how far we have to go in the treatment of mental illness and the stigmas attached.

Many people don't realise that in almost every corner of America there are massive former institutions (upwards of 500-700 acres, and 40-50 structures) with both architectural and historical significance that currently lay in a state of decay destined to the fate of the wrecking ball.

In the United States alone, the rise of the Asylum Era saw upwards of 300 institutions being built in response to a drive for social reform whereby the "insane" would be removed from their shackles and confinements in jails poorhouses, and private basements, and placed in institutions built specifically for the combat of their ailments.

In the 19th century – long before the introduction of medicine – 70-90 per cent of doctors believed insanity was curable; but only if patients were treated inside buildings that were constructed under very strict layouts and design specifications.

This sympathetic approach to mental illness gave way to the idea of 'architecture as treatment' applying the concept of environmental determinism whereby an individual's environment (including architecture) can effectively alter an individuals behaviour.

My aim is to open society's eyes to these places, which were rarely seen by those who were not either a patient, physician, or employee of these former institutions. They are, and were very much a closed-off area of society. And as a result, we've all developed a sort of morbid curiosity, and natural urge to see these places.

You really never know what you will encounter in these abandoned spaces. Some are incredibly empty; and others are filled to the brim with old equipment, hospital records, and objects from the time in which they were active.

One place in particular had a heartbreaking room full of patient luggage; another had a lot of bio-hazardous material – blood samples in test tubes, brain samples encased in wax, and bodily fluids on microscope slides etc.

One of the more shocking things I've experienced is an institution in New York City that had six inches of bird faeces covering the floor. Birds would come in through broken windows seeking shelter and not find their way out; ultimately starving to death and defecating everywhere in the process. There's something incredibly ironic about that, as a large number of "chronic" patients would spend their entire lives until death institutionalised in such a place.

Most importantly, I've learned that these places were once an object of civic pride. So much so, that through antique dealers you can actually find old postcards featuring vintage photos and depictions of the former asylums sent by patients, sent by locals, etc.

The grounds were well maintained and included beautiful green spaces with fountains, walking paths, bandshells, and gazebos. A long shot from what we're supposed to believe through popular culture which has unfairly inspired fear of these places.

Not all these asylums were terrible places run by terrible people

These institutions were founded with good intentions. However as society realised these could be human warehouses, that is where they began to fail – as the infrastructure and staff was unable to properly treat so many individuals. If you had anything that set you apart from the general population, the sad truth is that you could end up institutionalised.

The massive buildings became extremely expensive to maintain, and the quality of care quickly was quickly reduced. While some institutions borne of the asylum era are remembered for their for their immoral treatment and inhumane care; it is important to remember that this was not the widespread norm.

In most cases the employees and physicians operated under to the best of their abilities based on the knowledge and understandings of the time. The truth is, not all these asylums were terrible places run by terrible people. 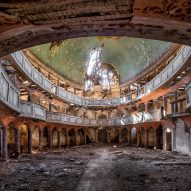