A huge clay-tile roof envelops the remnants of a 12th-century monastery in this project by Lundgaard & Tranberg Architects, which is one of the nominees for this year's Mies van der Rohe Award.

The Copenhagen firm placed the Kannikegården building over the 1,000-year-old ruins in Ribe, Denmark, which lie to one side of the city's square.

Both the walls and the roof are clad with clay tiles. Wooden pillars raise the gabled roof structure above the foundations of the Augustine Canon monastery.

The archaeological excavations also uncovered the remains of the country's oldest christian cemetery from 800 AD – a period when the country was transitioning from the Viking to the Christian Ages. Glazing set in between the columns gives views into the space from the square.

"The project task was faced with a special challenge: ancient discoveries, telling us about Danish history over the past thousand years, have been found on the building site," said the architects.

"The simple brick-clad volume hovers above the city floor to expose an open ground floor with a 1,000-year-old brick ruin integrated within," they added. "The ruin, as well as the modern cladding, convey stories of cultural and historical heritage."

The scale and pitch of the roof is based on the square's architecture, and it tapers towards the south to ensure daylight still reaches the existing building it. There is also a planted courtyard here.

"The project draws several threads to the place of cultural and historical heritage, where the past meets the present," said the architects.

"It is an interesting symbolic point that the brick ruin, by virtue of its original function as a refectory of the ancient monastery, is a distant ancestor of the new building."

Asides from sheltering the archaeological excavations, the building also hosts functions for the church council and staff, as well as serving as an events space for talks, concerts and film screenings.

Offices are set on the floor elevated directly above the ruins, while an assembly hall is located in the apex of the roof. These are accessed via a stairwell with dark red balustrades and slatted timber walls. 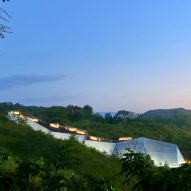 Kannikegården is shortlisted for the Mies van der Rohe Award 2017 alongside four other projects: a London housing scheme by British architect Alison Brooks; flats in Amsterdam by Dutch studios NL Architects and XVW Architectuur; a Warsaw museum by Polish firm BBGK Architekci and a memorial in Rivesaltes by French architect Rudy Ricciotti.