Big windows replace the rear wall of a 20th-century house in Rotterdam, which has been overhauled by Shift Architecture Urbanism to create two light-filled apartments.

The Rotterdam-based studio was tasked with renovating the derelict four-storey residence by a neighbour, who bought the property after being troubled by its neglected condition.

One of the flats occupies the lower two levels, while the other is placed on the upper two floors. Both feature open-plan living areas with lounges at the rear, the kitchen in the centre and the dining room at the front.

The architects restored the street facade but removed the back wall entirely to open the lounges to the garden.

The wall is replaced with a galvanised steel structure that allows for three large openings. Sliding glass doors open the partial basement to the garden, while full-height windows illuminate the floor above and a trio of floor-to-ceiling double doors open to a small balcony on the lower level of the second flat.

"The original back facade was completely run down so we had demolish it and replace it with a new facade," architect Thijs van Bijsterveldt told Dezeen.

"We took this as an opportunity to create a much more transparent back facade, but also to extend the facade until the balcony line, and thereby creating more internal volume for the apartments."

Inside, the interiors are stripped back to reveal a wall of existing brickwork with plaster markings, and the wooden roof trusses.

In each of the apartments, part of both of the upper floors is removed to create double-height spaces for the main living areas. More private spaces, like the bedrooms, occupy what is left of the floor above and are hosted in boxes that jut into the open space below.

This effect is intended to reference Russian matryoshka – a set of wooden dolls of decreasing size placed one inside another – and so the architects named the project Matryoshka House.

"The house was stripped to nothing but its envelope and flooring structure, the later partly removed in each unit to create double-height living spaces," said van Bijsterveldt.

"The private spaces are suspended in these tall spaces creating the matryoshka effect: a box within a box."

The top floor of each flat has a different layout to make the most of the natural light available.

In the lower apartment, two bedrooms and a bathroom are contained in a box suspended above the centre of the living space.

The box hangs over the kitchen, leaving voids at either end for a 14-metre-high lounge facing the garden and a dining area beside the entrance.

Glass doors with turquoise-painted frames and mesh balustrades open from the bedrooms onto the living space below. A second opening contains one of the building's original stained-glass windowpanes placed within a new frame.

"We wanted to preserve as much as possible of the original building, and carefully removed the stained glass windows from the original facade and relocated them in the 'interior facade' of the master bedroom," explained the architects.

Inverting this layout, the upper apartment features bedrooms, rather than the voids, placed against the facades of its top floor. This opens up the centre of the lower floor to a large skylight in the roof of the building.

A steel-clad volume running along the side of the living space encases a brightly coloured staircase – red in the lower apartment and electric blue in the upper one.

Steel panels in the volume also conceal a toilet, storage space and kitchen equipment in each flat. Kitchen islands are set in the centre of the space in front and are clad in bright white tiles.

A second set of stairs in the lower apartment, which features concrete treads and a wooden base, lead from the half-basement level to the front garden.

The spaces are furnished with brightly coloured textiles, including a Keystone chair by Eindhoven studio Os & Oos. Tubular lighting by the same studio is also treaded through the exposed rafters in the top floor.

"Warmer materials and colours balance the use of reflective metal, concrete and black steel," said the architects. 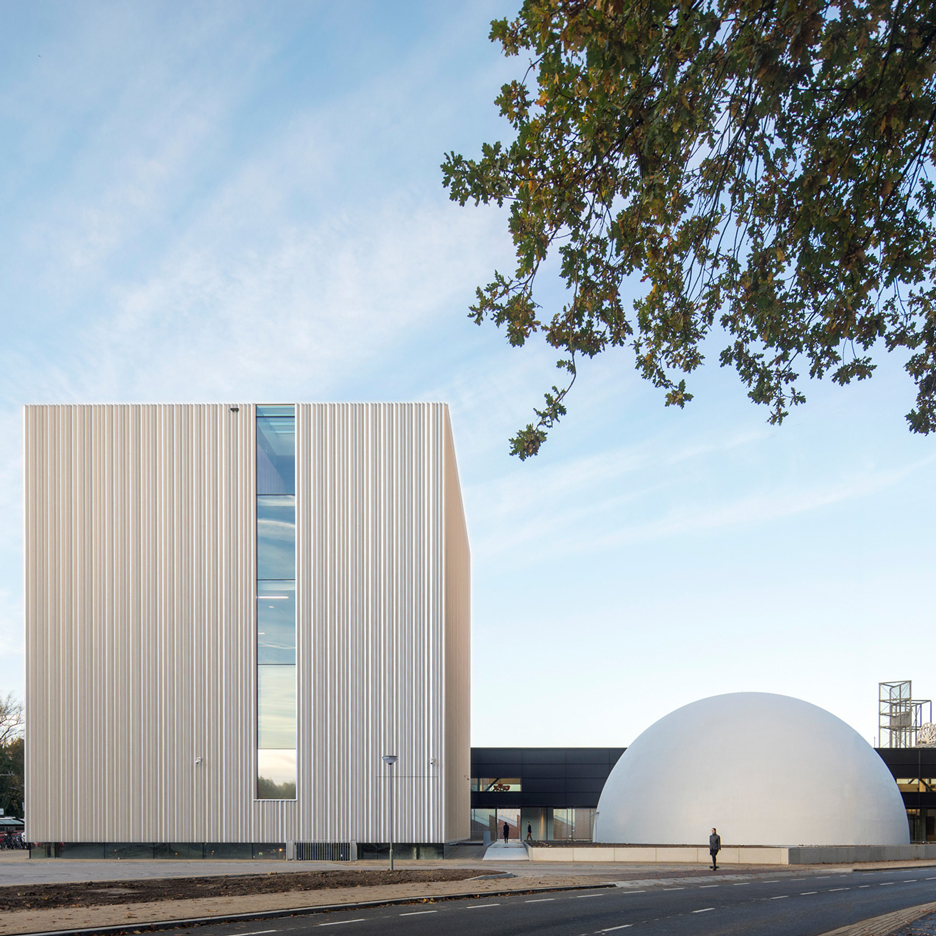 Similar urban renovation projects by the studio include inserting a 14-metre-long multifunctional cabinet wall into an Amsterdam residence, replacing a load-bearing wall of a Rotterdam townhouse with a three-storey bookshelf and converting a suburban house into a dental surgery.

Photography is by Noortje Knulst.