Appareil Architecture entirely renovated this Montreal duplex to restore existing elements of the structure, extend the home with an additional floor, and bring more light to the interiors.

The Gounod Residence is located in Villeray, a vibrant district that lies to the northwest of the Canadian city's downtown area.

The recent renovation was completed by local firm Appareil Architecture for young owners intent on settling in and raising a family.

"The team gave a new lease of life to the duplex's existing structure, now transformed into a single-family dwelling," said the studio, which was founded in 2010.

First, the exterior of the 1920s building was restored using original materials. "The masonry was completely redone, the foundations were restored and the fenestration of the front facade was replaced," the architects said.

Adding another floor to the two-storey building allowed the firm to create new patio spaces – a feature the clients requested specifically.

The four-bedroom home encompasses 4,000 square feet (372 square metres). Upon entering on the ground floor, visitors face a double-height dining area, which is connected to the kitchen and living room.

Climbing up a compact staircase with wooden treads leads to the second floor, which contains two smaller bedrooms that share a bathroom off the landing.

This floor also contains a home office overlooking the dining area below.

The top floor addition is entirely reserved for the master suite. The homeowners each have their own bathroom and closet, in addition to sharing an outdoor space that can be accessed from the bedroom or hallway.

An additional guest bedroom is located in the basement. This level also includes a flexible space, as well as smaller rooms for storage and utilities.

The rooftop extension contrasts the original brick facade, and is clad in dark metal panels.

"Its new and singular appearance distinguishes it from others in the neighbourhood and forms a bridge between past and present," said the firm.

On the inside, the architects sought to unify the social spaces by removing partitions to let light in.

This included the partial demolition of some of the floors, which creates vertical sight lines between spaces.

"The team first broke through the different levels in order to decompartmentalise the space and thus create a much more convivial relation between spaces," they explained.

New windows were also opened in the back of the home, giving residents a renewed view of their own back yard.

"The huge windows that are now featured on the rear facade offer a greater amount of light inside and a deep view of the charming little lane that runs along the building," said the firm.

Warm interior finishes, such as ash and walnut wood, were chosen for the floors and ceilings. The architects also painted all interior walls white, which created brighter living spaces.

Other similar projects include an extension with a metal rooftop by Naturehumaine, and a flat in Moshe Safdie's Habitat '67 that was reconfigured.

Photography is by Francis Pelletier. 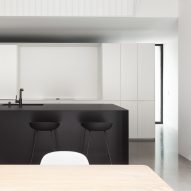