Mexican architecture studio Arqmov Workshop has overhauled a V-shaped industrial building by adding a patterned facade, windows that angle outward and a prominent entrance on the pointy corner.

Triangulo Corona is located in Naucalpan, on the outskirts of Mexico City. It is situated within an industrial area dotted with warehouses, street markets and modest homes.

"The residential environment is one of self-construction, where materials appear in their raw state, devoid of finishes – a quality that defines the architecture and environment of this low-income area," said Arqmov Workshop, which is based in the city.

For the adaptive reuse project, the team sought to retain existing elements where possible. "One of the main aims of this project was to optimise urbanisation, with a focus on positive transformation and the utilisation of existing elements," the studio said.

On the exterior, the firm created patterned facades made of grey and red concrete bricks. It also punched square windows into the walls and angled them outward.

On the pointy corner of the building, the team carved away the lower level, resulting in a recessed entryway.

A V-shaped stairway leads to the main door. The volume overhead is supported by large black columns.

Inside, the studio created a central corridor, bordered on both sides by glazed storefronts. The lofty space is illuminated by a series of skylights.

A mezzanine was inserted using the same construction methods as the existing structure. A blue stair with glass walls leads to the partial level.

"The refurbished object seamlessly blends with its context," the firm said. "Its geometry and image achieve maximum transformation with minimal impact, and certainly help revitalise the neighbourhood."

Other Mexico City projects by Arqmov Workshop include an urban housing block covered in small wood squares and a residential building with angled windows and coloured laminate panels. 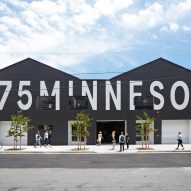