Ross Lovegrove has designed this year's Fashion Awards trophy, which consists of a laser-cut DNA double helix that appears to be suspended inside a monolithic crystal.

The Welsh designer was commissioned by the British Fashion Council and Swarovski to create the award, which will be handed out during an awards ceremony in London's Royal Albert Hall on 2 December.

To create the trophy, 18 different facets are cut into a single piece of crystal to create a towering trapezoid structure, measuring 24 centimetres in height.

The winding, double-helix structure is internally etched into this solid crystal using sub-surface laser engraving. This technique involves firing two lasers into the glass, creating a visible rupture where the two beams meet.

"The DNA that's etched into the core of my crystal design reflects the endless creative diversity that can come from a single source," Lovegrove explained.

"As a designer it's given me great pleasure to design the 2019 Fashion Awards trophy as I realise the impact that fashion has on many areas of human existence and culture."

Undulating, interweaving forms are something of a trademark of Lovegrove's and pop up both in his product designs, for example in the Andromeda light, as well as in his architectural work. 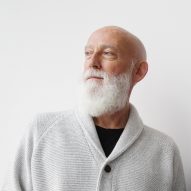 In line with the designer's focus on sustainability – which recently saw him create a furniture collection for Natuzzi from renewable and recyclable materials – Swarovski's production process uses a lead-free formula and 76 per cent recycled water.

A third of the energy used in the process also comes from renewable sources, in an environmental strategy that recently earned heiress Nadja Swarovski the Fashion Institute of Technology 's Social Impact in Sustainability Award.

Swarovski has a track record of commissioning high-profile designers for the conception of the annual Fashion Awards trophies.

Nominees at the 2019 Fashion Awards include Jacquemus – who recently designed a restaurant in Paris – Prada and Gucci for brand of the year. Contenders for designer of the year include Kim Jones representing Dior Men, and Jonathan Anderson for JW Anderson and Loewe.