A large window is set at the apex of the steeply inclined roof of this house by Chvoya in western Russia to offer its residents views out across a nearby bay.

The 183-square-metre family residence is located in Pribylovo, a small village surrounding the deep inlet of Vyborg Bay on the eastern end of the Gulf of Finland in the Baltic Sea.

The Saint Petersburg-based studio wanted to provide vistas to the sea on the northern side of the site, but local building constraints called for the house to be built towards the back of the plot.

The two uppermost floors are concealed with the steeply pitched roof to benefit from the best views over the bay.

A metal roof folds over the top two floors at the southern side of the house, while the lower floor is covered in horizontal slats of timber and the northern facade is faced entirely in vertical planks of the same light-toned wood.

Three openings in the north-facing facade include a large window set at the top of the house to provide a view of the sea from the study and sitting room.

The opening is also intended to act as a marker of land from the sea as it lights up at night time.

A row of full-height glass doors runs along the ground floor of this facade, flooding the open-planned lounge, kitchen and dining area with natural light.

Wooden shutters are placed in front so that the five openings can be closed to blend in with rest of the facade.

On the first floor a small off-centre window provides the second study with a view to the sea.

Three bedrooms occupy the rest of this level. Skylights are placed in the staggered roof provide two of the bedrooms with plenty of natural light, while the third features windows in the eastern side.

A dog-leg staircase connecting the three floors features open risers and a handrail made of wooden slats to allow natural light from a tall window to permeate the well.

The internal walls and ceilings are lined with light-toned pine planks and the floors are covered in wooden boards with a darker tone.

At points these wooden finishes are offset by touches of colour, including the mosaic tiles that clad the fireplace in the living room, as well as painted doors and bathroom cupboards.

All the furniture in the house is from IKEA, from the green sofa to the white chairs and exposed wooden bed frames.

House in Pribylovo follows a series of residences designed to make the most of their seaside location, with others including a Lebanese housing complex with shuttered towers and a home that juts out over the rocky Maine shoreline. 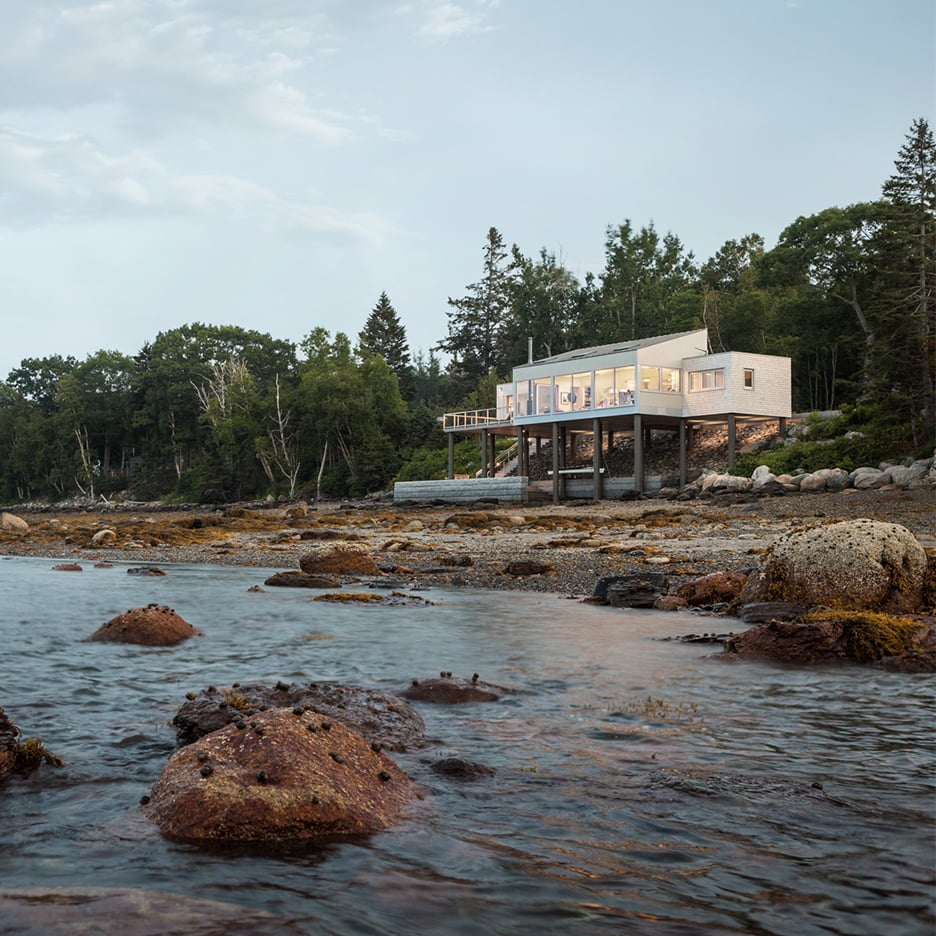 More by the seaside