Icelandic studio And Anti Matter has launched its first collection at this year's DesignMarch, conceived as a series of concrete objects and lamps that bridge the gap between art and design.

The collection features a series of floor lamps created from neon rods, which have been bent out of shape and partially encased in steel tubes.

"We played with ideas of antennae, transmitters, signals, receivers and those sort of things when sketching," the duo told Dezeen. "We drew the shapes from sounds and memory of sounds."

The lamps are set in moulded concrete bases in a variety of pastel colours and shapes. Paint chips were blown onto the surface and coated in a clear lacquer to create a terrazzo effect.

"It's a semi-forgotten process," Björnsson said. "A lot of industrial spaces use this method, because it is thought to be calming for the brain to work in. We found that to be incredible beautiful."

Moulded concrete and paint chips were also used to create a series of objects that can be assembled to create large or small sculptures.

"The domestic sculptures can become functional objects," said Björnsson. "Then there are these smaller objects that you can rearrange yourself. They are conceived as display functions, in case you want a more exciting pedestal for your potted plant."

The duo created an installation to showcase their work during DesignMarch inside a the factory, accompanied with experimental electronic music composed by Björnsson.

Industrial pendant lights hung from some of the objects, while others were arranged in random compositions on the workshop floor.

"We want to live somewhere on the borderline between visual art and design, or aesthetics and functionality," Björnsson told Dezeen.

"We've created modular sculptures that become functional objects. Some have obvious functions like giving light, but with others – you can hangs things from them, but they're more like a drawing in the space."

Previously Unreleased derived from a project created for the Icelandic Design Centre in November last year. Halldórsdóttir is a fashion designer and stylist, and Björnsson is a visual artist and electronic musician, both based in Reykjavik.

DesignMarch is Iceland's biggest design festival, and ran from 22 to 26 March 2017 in Reykjavík.

Photography by And Anti Matter unless otherwise stated. 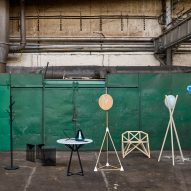