It's day five of Milan design week and this year's best exhibits at the Salone del Mobile furniture fair are emerging on our #milanogram2017 hashtag, including standout installations from the Euroluce lighting fair.

Highlights from the sprawling furniture fair include Moroso's stand, which has been designed by Spanish designer Patricia Urqiola and features work by Amanda Levete, Benjamin Hubert, Ron Arad and Nendo.

British designer Jasper Morrison is displaying his new chair for Emeco made from an aluminium tube that is only an inch thick.

This installation by Spanish designer Arturo Álvarez is designed to evoke emotions, and has been one of the most talked-about displays at Euroluce this year.

Meanwhile, young and up-and-coming designers have their own arena at Salone Satellite. Among them is Studio Wilenius, whose stand is a favourite of Dezeen reporter Alice Morby.

Other highlights from the past day include Marni's vibrant playground filled with coloured sand, which displays the brand's handmade Playland collection.

All week, Dezeen has been using Instagram to reveal all the latest Milan design week news and a curated selection of the best images posted to our #milanogram2017 hashtag.

If you're visiting Milan design week, tag your Instagram pictures with #milanogram2017 for a chance to win £500 to spend at Dezeen Watch Store. We'll announce the winner early next week. 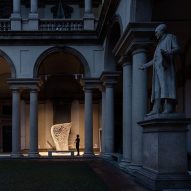