On during Milan design week, Salone Satellite has presented over 10,000 designers to the fair's visitors since it began in 1988.

Swiss studio Big Game and Norwegian designer Daniel Rybakken are among the Satellite alumni, and were included this year in a separate exhibition to celebrate the event's 20th anniversary. The exhibition brought together 46 designers who have gone on to have international success.

Here are our picks of the eight studios and designers we expect to see big things from next.

Holland-based Studio Truly Truly presented its impressive catalogue of products, including a collection of lamps featuring bendy LED lights and a chair made from layers of woven wire.

We've already seen a number of products from Dutch designer David Derksen, all of which were on show at his Satellite stand. These included his Table Architecture trays and candle holders, which – when grouped together – are reminiscent of a city skyline.

He also showed a collection of wall lamps that use overlaid pieces of etched brass and steel to create moving patterns.

Oregon-based designer Erdem Selek showcased a number of his products at Satellite, including the PlusMinus screwdriver, which the designer intends to be kept out on display rather than tidied away into a toolbox.

Singaporean industrial designer Olivia Lee graduated from Central Saint Martins in 2008, and during her time in London worked under the mentorship of Sebastian Bergne. She describes her studio as "straddling the worlds of art, design and experience", with her work always taking into consideration the human element.

Croatian studio Regular Company is a multidisciplinary studio that works across the fields of products, interiors, branding and digital design. Founded in 2015 by Ruder Novak-Mikulic, Marija Ruzic Vukmanic, Marinko Murgi and Tihomir Filipec, the studio presented several prototypes at Satellite that were developed in collaboration with craftsman using traditional techniques.

Studio Wilenius was founded by Helsinki-based Janne Johan Wilenius, who trained in glass making and industrial design. Both of his practices were evident in his Satellite stand, which featured blown-glass vases as well as refined wooden furniture. 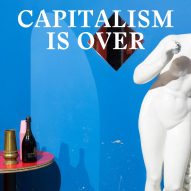 Eight trends to look out for at Milan design week