US firm HGA Architects and Engineers took cues from Cape Cod-style homes while conceiving a series of cabins for world-renowned musicians spending the summer in rural New England.

The Marlboro Music Cottages are located on the 500-acre (202-hectare) campus of Marlboro College, tucked in the foothills of Vermont's Green Mountains. Each summer, the campus hosts the Marlboro Music School and Festival, which began in 1951.

Approximately 80 distinguished classical musicians stay at the verdant campus for seven weeks, homing their craft and hosting public performances. Past attendees include Yo Yo Ma, Jonathan Biss and Murray Perahia.

"Although called a school or a festival, it is in reality more of a sabbatical or cloister for musicians – a place where eminent artists and exceptional young professionals from around the world gather to live, play and learn together," said HGA Architects and Engineers, a firm based in Minneapolis

While most attendees stay at dormitories on the campus, HGA was charged with creating five cabins to accommodate senior-level musicians.

The cottages needed to embrace the natural setting and pay heed to "the unique and organically evolved culture of the festival", along with its casual atmosphere.

In response, the team – led Joan Soranno and John Cook, both HGA principals – conceived small dwellings with cedar plank cladding and pitched roofs. The cabins are situated along an old logging road that has been renamed Musician's Way.

The designers drew inspiration from Cape Cod-style homes, which are popular in New England and generally consist of a single-storey box topped with a gabled roof and central chimney.

The team conducted ample research into the architectural style, finding that homes were kept low to the ground in order to reduce the amount of interior space requiring heating.

"The result of these investigations led to a building that sits low to the ground, with roof eaves starting at a mere seven feet above the floor," the studio said. "The effect is to snug down the roof over the main body of the house – like a knit cap when the November winds begin to howl."

Each cabin sits on a base of split-faced stone. While Cape Cods are often painted white – making them pop out of the landscape – the team opted not to conceal the natural wood siding.

"We felt it was more important to create continuity with nature, rather than to compete with it," said Soranno. "The connection with nature is what makes this place special."

Moreover, the cedar cladding is meant to weather over time and take on a silvery hue. Zinc metal chimneys and window frames will also show their age, becoming "duller and softer in appearance".

Operable windows eliminated the need for air conditioning. The openings are larger than the traditional Cape Cod, which enable them to bring in more natural light and provide more expansive views of the surrounding forest.

During the off-season, when school is back in session at Marlboro College, the cabins are leased to faculty members.

Other projects by HGA include a mausoleum with a carved stone facade and cedar-clad cabins that sit atop concrete piers on forested hillside in Minnesota. 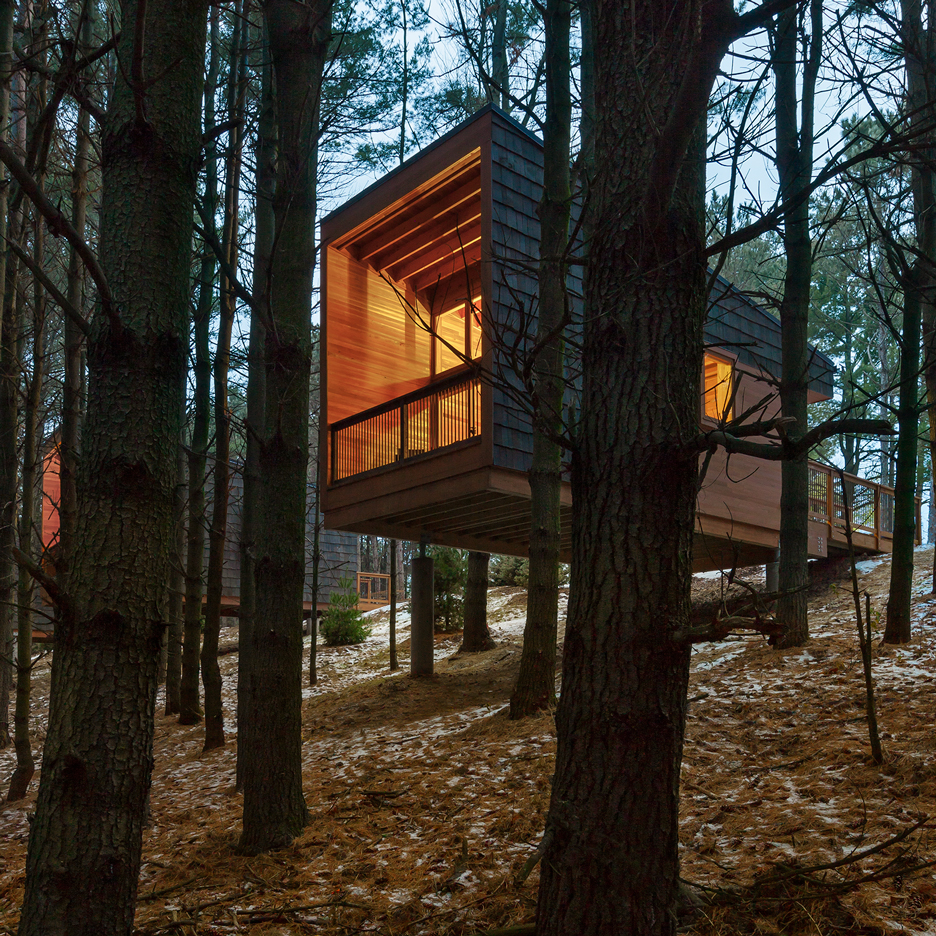 HGA perches cedar-clad cabins on a forested hillside in Minnesota