Tables branch out of this eight-person sofa, designed by Swedish studio Front to offer a relaxed breakout space in bustling offices.

Front created the furniture – which was on show at Milan design week – as an experiment for Swedish brand Offecct. It is meant to inhabit the middle of a room, and function as both seating and a temporary workstation.

Four small tabletops sprout out from under its asymmetric oval seat – designed to recall the roundness of hills or dunes. They are held on metal branches that also double as legs for the sofa.

Each table has a USB charger and a hook for hanging bags or coats, and they've been placed so the furniture can be arranged singly, or together to form a group.

"We were asked to think about the contemporary office and a type of furniture that could be a meeting place," said Front's Sofia Lagerkvist. "It's not only the office – when you're in a hotel you need a place to sit down and send emails."

"The idea with the form is that it has this kind of movement within the legs, which sweep up and become the table, and create a platform that almost stands on springs."

Front, which was set up in 2003, has designed several pieces of furniture that play with traditional shapes and functions. Projects have included the lifesize Horse lamp for Moooi, and a storage system that stacks up like Tetris blocks.

Offecct produced the furniture in response to the changing needs of public spaces, particularly busy offices where workers are looking for places to hold informal meetings.

"I think today in general, offices have become very flexible," said Lagerkvist. "It's constantly changing with people working different hours or days, so it's important to have a place where people can sit and meet, and have a break from their desk."

Offecct has tackled busy offices before, launching a collection of petal-shaped screens, designed by Jin Kuramoto in 2016, that could shield workers from noisy open-plan interiors.

Dune is part of ongoing research by the company's Offecct Lab, which partners with designers to develop and use new materials and products, particularly in response to potential future trends and needs. Projects from the lab are fine-tuned and developed until ready to be released as part of Offecct's collection.

Dune was on display at Salone del Mobile in Milan from 4 to 9 April. Other products on display at the fair included torture-inspired chairs by Philippe Starck for Driade and metal projects by seven female designers for Italian brand De Castelli. 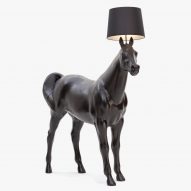 Front's lifesize Horse Lamp for Moooi was a provocative experiment