The firm opted for a minimalist approach for the 18,000-square-foot (1,672-square-metre) renovation in Midtown Manhattan, which encompasses open workspaces, closed offices, and a showroom area made of modular rolling elements.

The design pushes back against certain elements typically found in modern-day office environments. Instead, it relies on more basic architectural cues to organise the workplace.

A central elevator bank opens onto the reception area. The centre of the plan is occupied by an interior courtyard that brings additional light into the offices.

The periphery of the floor plate contains enclosed office spaces. Some of these are private, but others are used for meetings or group work.

The architects sought to balance the advantages of open-plan office spaces, like collaboration, and those of traditional workplaces, where enclosed rooms facilitate concentration.

The back of the office contains a showroom area, where four large display cases clad in a mirror-finish can be reconfigured for different uses.

"The modules partition the space and accommodate product display and storage on the inside," said Only If Architecture, founded in 2013. "An 'x' configuration divides the showroom into four intimate meeting and presentation spaces. Other plan positions allow larger and more contiguous configurations."

Singular elements such as the reception desk were made out of different materials that contrast the interior's palette. These include mirrored surfaces, wood, felt, stone and glass.

Other minimalist offices include a monochrome workplace in San Francisco by Garcia Tamjidi and Kinfolk magazine's new office in Copenhagen, completed by Norm architects.

Photography is by Michael Vahrenwald and Midori Hasuike. 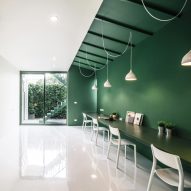 12 minimalist office interiors where there's plenty of space to think