Making its debut at Milan design week, American brand Matter Made has brought together designers including Faye Toogood, Philippe Malouin and Pedro Venzon to produce a sculptural furniture and lighting collection.

Called MM XVII, the collection was arranged across a series of colour-blocked vignettes in a space on Milan's Via Pietro Maroncelli. The pieces all feature striking silhouettes and minimal details, with a focus on contrasting materials.

The contribution by British designer Faye Toogood is a series of lights with forms inspired by the rounded caps and long stalks of mushrooms.

The Puff Ball series includes an oval wall sconce, a domed table lamp, and a floor light that sits on a pair of chunky legs and features an oversized shade. The lights emit a soft glow through their raw fibreglass shades, which contrast matt aluminium supports.

Toogood, who held her first solo show in the US earlier this year, also showcased wallpaper based on her own paintings during Milan design week.

The Arca chandelier is based on a modular system, meaning arms can be added or taken away as desired. In addition, the designer created a coat hook that echoes the form of the chandelier.

Brazilian designer Pedro Venzon's Pudica chair – based on shapes found in architecture left over from Portugal's colonisation of Brazil – is included in the collection. Venzon borrowed the typically curved windows of his country's colonial buildings to create the distinctive, oblong backrest of his stackable chair.

Made from steel or brass, Venzon's second chair for the collection has an ultra-minimal backrest designed to appear as if delicately perched. Its name, Avoa, echoes the Portuguese word for flight.

American designer Jonah Takagi created a Shaker-inspired candle holder for the collection. Machined from a block of aluminium, brass or marble, the Setup candle holder features four holes that are designed to accommodate several candle sizes including leftover stubs.

Other highlights from the collection include the industrial-style Centina aluminium shelving. Featuring angular column supports "inspired by the governing geometries of architecture", the shelving is designed by London studio Oeuffice. The Slon dining table, created by Ana Kraš, is made from solid black marble.

Matter Made is the in-house brand of New York gallery and showroom Matter, which was founded in 2003 by Jamie Gray. He launched Matter Made in 2008 and manufactures the collection in Brooklyn. 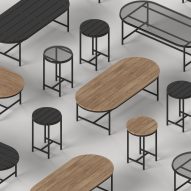 The pieces were on display at Via Petro Maroncelli between 7 and 9 April for Milan design week.

Other collections shown during Milan design week include Alain Gilles' steel-framed furniture for Vincent Sheppard, a range of tiles based on Le Corbusier's colour theory, and a set of minimal chairs modelled on Hong Kong's architecture.