Red concrete walls frame a chasm leading to a memorial inside Warsaw's barbican, which commemorates the thousands of Polish citizens murdered by the Soviet secret police during the second world war.

Designed by local studio BBGK Architekci, the Katyn Museum– one of five projects in the running for this year's Mies van der Rohe Award – is split across three 19th-century buildings of the fortified red brick citadel in Warsaw's old town.

The Polish military museum commemorates the mass murder of more than 20,000 Polish citizens between 1939 and 1940 in Russia's Katyn Forest.

"Katyn Museum is there to commemorate a painful episode of Polish history which took place during world war two when over 20,000 Polish military officers and state officials were brutally murdered by the Soviet secret police," said the studio.

"The history of Katyn in its cruelty and evil immensity is much too difficult to comprehend," it added. "Fifteen plaques commemorating the 21,768 victims located in the historic gunrest raise questions about the meaning of the concepts of evil, good, forgiveness."

The entrance is set at the barbican's Nowomiejska Gate and exhibition spaces are arranged over two levels of the caponier fortification.

A shaft flanked by tall red-tinged concrete walls leads down into a third exhibition space within the brick vaults, where the names of the victims are displayed on plaques.

Personal items belonging to those murdered in the Katyn Forest – a knight chess piece, letters, ammunition and various badges of decoration – were used to imprint the 12-metre-high walls.

An oak cross positioned at ground level is aligned with the red concrete passage, a material chosen to tone with the red brickwork of the original buildings.

"This is where the narrative of the museum ends – here we also decided on the strongest spatial gesture,"architect Malwina Borowiec told Dezeen.

"The two walls, made entirely of coloured concrete bricks, cut the shafts of the 150-year-old Russian citadel. In many places in the concrete we have stamped small items found on the victims."

"We decided to use red-tinted concrete so that the new material wouldn't overwhelm the original matter of brick," she explained. "The new substance was about connecting with the existing structure of the old Warsaw citadel."

The Katyn Museum is up against a London apartment block by Alison Brooks, a shelter for medieval ruins in Ribe by Lundgaard & Tranberg Architects, an Amsterdam housing scheme renovated by NL Architects and XVW Architectuur, and a second world war memorial in Rivesaltes by Rudy Ricciotti for the Mies van der Rohe Award 2017.

The biennial award, named after German-American architect Ludwig Mies van der Rohe, is the most prestigious accolade in European architecture. 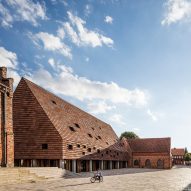 An original shortlist of 40 projects was whittled down to find the five finalists in February, and the winner of the €60,000 (£51,000) prize pot will be announced next month.