With the first ever design week underway in the giant industrial city of Shenzhen in China, Dezeen takes a look at some of the newer and more unexpected additions to the calendar – including Riyadh, Medellín and Amman.

While the well-trodden trail would take you from Milan to New York to London, these new events are centred in cities and regions that are less well-known for their design scenes. Several are spread across the Middle East – from Saudi Arabia to Lebanon and Jordan – where they are tapping into the zeitgeist by exploring human population movements and the experience of women in design.

Meanwhile, the Chinese city of Shenzhen – until now best known as the place designers go to get things manufactured rather than for its own design credentials – is hosting its first design week. The event's emergence shines a light on China's desire to create its own intellectual property rather than copy the West, with brands like ZaoZuo, Stellar Works and Neri&Hu.

Read on for our picks of eight lesser-known design weeks worth visiting, with stops in Eastern Europe, South America and the world's northernmost design event.

This week saw the launch of Shenzhen's first ever design week, marking the city's desire to shift from manufacturing hub into design destination.

With more than 2,000 works by over 200 designers on show, the inaugural event has been shaped around the theme of Design for the Future. A series of exhibitions and talks discussing issues around creating a liveable and sustainable future for Chinese cities and rural communities are taking place, while the new Shenzhen Global Design Awards has asked designers from around the world to submit innovative projects under the Design for the Future theme to be in with a chance of winning some of the US$1 million (£780,000) prize pot.

The event is run by the Shenzhen Municipal Government and supported by UNESCO Creative Cities. Image by Chris.

Now in its sixth consecutive year, Beirut Design Week promises to attract 25,000 visitors to over 150 events in different districts of the city over seven days.

The fair is organised by the MENA Design Research Center, which encourages participating designers to develop new concepts, respond to current events and interact with one another at a conference, and through talks and workshops.

Since 2016, the festival's hub has been at KED, a 1930s metallurgical factory, in the industrial zone of Katarina next to Beirut's port. Here, four floors of exhibitions will respond to this year's theme – Is design a need? Highlights include an exhibition of technology prototypes inspired by our future need for physical human interaction as well as an exhibition that explores the role of women graphic designers in Lebanese contemporary visual culture.

Since its launch in 2012, Romanian Design Week has been steadily growing in size each year, with 2017's event promising to be its largest yet.

The brainchild of events organiser The Institute, Romanian Design Week gathers 150 projects from more than 100 designers, design and architecture studios in multiple venues across the city.

For its fifth edition, the Bucharest-based event will launch a new Creative Quarter initiative that has taken root in one of the city's most famous historical buildings – the Universul Palace. This former printing house will host an array of creative new tenants including a theatre, barber shop, bars, a cafe, a design shop, an art gallery, an advertising agency and an architecture office.

Founded in 2009 as Designweek and renamed to Bratislava Design Week in 2013, the eight-year-old event showcases the best emerging and established design brands and producers from Slovakia and beyond. The week is spread across three venues in the city, including the unique late-baroque Erdödy Palace, where the week's main exhibitions are showcased. Open Call installations are located in a space above a cafe in the city's Laurinská Street, while lectures, discussions and concerts will take place in a gothic Klarisky church.

This year's festivities will include a special installation by Dutch designer Sander Wassink.

In the past decade, Colombia's second-largest city has won much acclaim for its creative urban design that helped to transform it from one of the most violent cities in the world into a socially inclusive community. In recent years, a host of public architecture projects have continued to provide a framework for social development, and since 2015 Medellín Design Week has provided a platform for creatives living in the area.

Organised by Mediaplus, Fair HOME and Tu Taller Design, Medellín Design Week showcases the work of over 50 national and international exhibitors in venues across the city such as Plaza Mayor and the Museum of Modern Art.

Held for the first time in September 2016, Amman Design Week is currently gearing up for its second edition, which will be based around the theme of movement. The 2017 edition will once again be stationed at The Hangar/Ras El Ain Gallery in the Jordanian capital's downtown district, with satellite events taking place at various locations across the city.

The event, which gathers designers from across the Middle East region who are pushing boundaries within their disciplines, attracted over 35,000 visitors in its first year – a figure which organisers hope will increase for its second edition.

During the nine-day event, Ahmad Humeid, founder and CEO of SYNTAX, will unveil an exhibition of regional and local designers at the Hangar, while a new exhibition that focuses on student work is slated to make its debut. Across the event, works by over 100 local and regional designers will be on display, each exploring the event's overarching theme of movement and the associated topics of mass migrations, interactive technology, hyper-connectivity, as well as issues of accessibility and strained mobility.

With its fourth edition scheduled for October, Saudi Design Week is a growing event that takes place each year in the Kingdom's capital of Riyadh. Encompassing a main exhibition, design conference, workshops and special events, the design week is aimed at establishing a design hub in the region where both local and international, established and emerging designers can converge.

Unexpectedly for a country where women's roles are restricted, the event was set up by two female entrepreneurs, Noura and Basma Bouzo. Basma and Noura, who run Oasis Magazine, have represented Saudi Arabia at both Dubai Design Week and the London Design Biennale. Saudi Design Week is run in partnership with the King Faisal Foundation for Research and Islamic Studies.

The 2017 edition will explore the theme of Design in Motion, including topics such as the process of design, kinetic design as well as design and sports.

Bringing together professionals in the field of design to discuss the future of arctic design, the design week will celebrate its 10th edition in 2018. The program encompasses a series of design talks and workshops, design exhibitions, a fashion show, pop-up design shops and restaurants, hosted in venues across the city – including the Arktikum and Pilke Science Centres, both located in the north bank of the Ounasjoki River.

The event is organised by the City of Rovaniemi and Rovaniemi Development Ltd with various business partners. 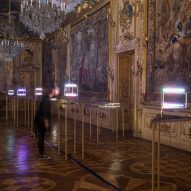 10 trends from Milan design week that nobody is talking about