The new name refers to the school's campuses, which also served as Wright’s homes – Taliesin in Spring Green, Wisconsin, and Taliesin West in Scottsdale, Arizona.

The school offers a Master of Architecture degree through a three-year program that earned full accreditation in 1996. The school was started by Wright as an architecture apprenticeship program, called the Taliesin Fellowship.

"Adopting this new name, the School of Architecture at Taliesin, helps us to secure our identity as an experimental, forward-looking architecture program that is deeply rooted in the Taliesin Fellowship," said Aaron Betsky, who became the school's dean in 2015 and is also a regular Opinion columnist for Dezeen.

"The process in which we developed our new relationship with the Foundation and our accreditors has been an opportunity to closely examine who we are as a school and how to best position ourselves to advance our mission and create quality educational experiences for our students."

In addition to its name change, the school has unveiled new branding designed by Michael Bierut, a partner at New York-based Pentagram who also designed the logo for Hillary Clinton's unsuccessful 2016 US election campaign.

The school's visual identity features typography that is horizontally oriented, which is meant to evoke the desert landscape that inspired Wright and his students. It also morphs to follow the shape of some of the architect's most famous buildings, in 2D.

The design is intended to honour the school's heritage while also looking toward the future. "The variety of forms that these letterforms will assume is meant to indicate the capacity for experiment and invention that has always been at the heart of the Taliesin experiment," said Bierut.

The school's leadership is also changing, effective this August. Betsky will become president, and Chris Lasch, currently director of academic affairs, will take over as dean.

The school's break from the Frank Lloyd Wright Foundation stems from an accreditation issue.

The Higher Learning Commission (HLC), one of the two agencies that accredits US architecture schools, passed a rule in 2010 that said accredited schools could not be financially dependent upon a non-academic institution.

The school needed to become an independent entity by this year to have its HLC accreditation renewed. Its accreditation with the second agency, the National Architectural Accrediting Board, is valid through 2023.

Despite the split, the school and the foundation will continue working together on programming and other initiatives. "We are truly grateful to the leadership of the Foundation for making this a seamless and effective transition," said Betsky.

The foundation will continue to own the two Taliesin campuses, which serve as "living laboratories that continue to advance Wright's principles".

"Seeing the next generation of great architects working and living in these settings is as important to their preservation as maintaining the walls that hold them up," said Stuart Graff, the foundation's president and CEO.

"We believe that Wright is more relevant today than he was even in his own lifetime, and the School of Architecture at Taliesin is a prime example of his ongoing impact and contribution to innovative architecture and design."

Wright would have celebrated his 150th birthday this year, and will be the subject of a major exhibition this summer at New York's Museum of Modern Art.

Other news related to the architect includes a sweeping initiative to resurrect his demolished or unbuilt projects. 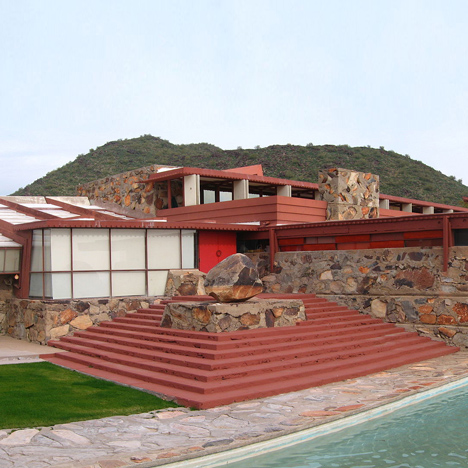